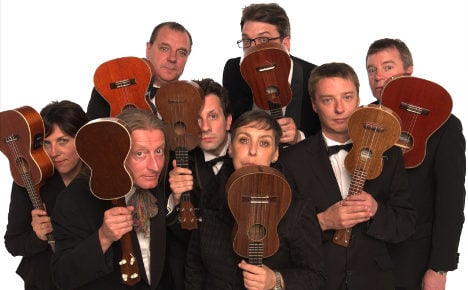 It’s movie time in the capital! And if you feel like avoiding the hoopla of Friedrichstadt Palast, the Sony Center, and Berlin’s other mega theatres, queue up in the kiez. Neighborhood Kinos like Filmkunst 66 in Charlottenburg, Babylon in Kreuzberg, and Neukölln’s Passage are getting in on the movie-loving action with special subset screenings. Check the schedule to see what’s playing in your neck of the woods.

Gerhard Richter turned 80 this week, and the Neue National Galerie isn’t going to let that milestone go unnoticed. The painter is after all one of Germany’s most accomplished living artists. Salute the man this week when around 150 works from his oeuvre go on view in Berlin. The retrospective offers a fascinating look the different themes and styles Richter’s embraced over the past half century or so.

No doubt Andy Warhol would have gone bonkers for social media. But sadly, the pop artist passed well before he could have started his own blog. A new exhibition at Frankfurt’s Modern Art Museum shows how Warhol incorporated the news into his art. See the 80 pieces from collections around the world that are “influenced by contemporary tabloids and other mass media.”

You might think of the Norwegian artist Edvard Munch as a 19th century painter famous for impressionist works like The Scream, but he was also a modern man fascinated by new technologies like film and photography. See for yourself this weekend at the Schirn Kunsthalle when a new exhibition goes on view featuring over 140 paintings, drawings, photographs, and films.

Cristina Gómez Barrio and Wolfgang Mayer’s collaborative art group Discoteca Flaming Star combines poetry, politics, sounds, and structures to create performance works that are entirely unique and exciting. Sound like your cup of tea? Check them out Thursday at Frankfurter Kunstverein when they perform “Actually 12-fold Alissa.” Written words on naked backs, a Spanish Civil War fight song, and a poem for Ayn Rand are just a few of the work’s intriguing elements.

A dragon dance, a culinary buffet, and a rock band from Beijing! Celebrate the Chinese New Year at Hamburg’s Yu Teahouse Garden and ring in the Year of the Dragon in style. Advance registration is requested.

There’s something about Israeli music that makes you want to fall in love. How appropriate that Israeli superstar Idan Raichel is playing in Hamburg on Valentine’s Day. Hold your honey’s hand while the band fuses electronic rhythms with Hebrew texts and Middle Eastern beats Tuesday. Israeli singer Noa kicks off the week-long festival Saturday night followed by a concert by jazz bassist Avishai Cohen on Sunday. Check the program for more.

Christy Edwards and Emily Manzo make really nice music that has been called “psych-folk.” And their inclination to experiment has earned them comparisons to The Velvet Underground. Be enchanted by the Brooklyn duo Tuesday at Die Nato in Leipzig.

Nobody, in the last 100 years at least, played Bach better than Glenn Gould. The late pianist would have turned 80 this year, and to honour the event, Gasteig is holding a whole weekend of events related to the great musician. With film, theatre, readings, workshops, and discussions, it’s Glenn Gould time in Munich.

Filming and Smoking – Film Festival for the Young Scene

If you’ve got a teenager in Germany chances are they speak German even if you don’t. Give them a five-spot and send them down to Muffathalle Thursday and Friday where they’ll see movies made by their peers. The two-day event features sixty films by young Munich directors.

The Ukulele Orchestra of Great Britain

I’m not exaggerating when I say The Ukulele Orchestra of Great Britain is probably the most entertaining live act on the touring circuit today. The rollicking troupe of little string pickers takes turns belting out the likes of Bowie’s “Life On Mars,” Kate Bush’s “Wuthering Heights,” and The Fugee’s “Killing Me Softly” with marvellous pluck. Strumming strong since 1985, the band stops in Munich Monday.