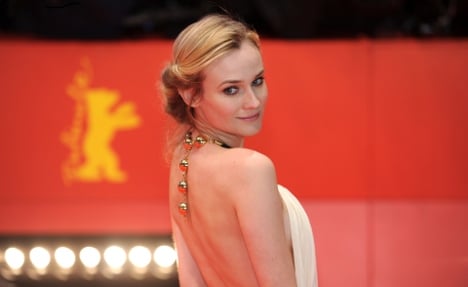 The German-born Hollywood actress leads a French cast that includes Lea Seydoux, who appeared in last year’s Woody Allen hit “Midnight in Paris”, and Virginie Ledoyen, best known abroad for her turn in “The Beach” with Leonardo DiCaprio.

The festival opener, directed by France’s Benoit Jacquot, tells the story of the frantic last hours at Versailles palace from the point of view of the servants.

The French-Spanish co-production is one of 18 pictures vying for the Golden Bear top prize at the first major European film festival of the year, which tends to reward timely, politically charged cinema.

Festival director Dieter Kosslick said he chose the film for the opening in part due to the parallels it draws with today’s popular uprisings including the Arab Spring and the “Occupy” movement against corporate greed.

“It’s been a year since (Egyptian leader) Hosni Mubarak was driven out of office and I suspect that the last 48 hours that he and the other despots had didn’t look much different than Marie Antoinette’s,” he told reporters.

Filmed on location at Versailles, southwest of Paris, the picture is a screen adaptation of Chantal Thomas’ prize-winning novel of the same name.

Last year’s Golden Bear went to the Iranian family drama “A Separation” by Asghar Farhadi, which also swept the acting prizes and is now nominated for an Academy Award as best foreign language picture.

Meryl Streep will pick up an honorary Golden Bear for her life’s work and the festival will show the top films of her acting career culminating in a gala screening of her new Margaret Thatcher biopic “The Iron Lady.”

And Angelina Jolie is to present her directorial debut, “In the Land of Blood and Honey,” a Bosnian drama about rape as a weapon of war, and participate in an audience discussion after the screening.

Also in competition is 2007 Golden Bear winner Wang Quan’an, who will unveil his sweeping Chinese epic, “White Deer Plain”, based on “one of the most controversial novels in modern Chinese literature,” Kosslick said.

Chen Zhongshi’s prize-winning bestseller depicts the struggle for survival of generations of rural families before the rise of communism.

For the first time in more than a decade, a Canadian production will enter the race with “War Witch” by Kim Nguyen about a child soldier in Africa.

US actor and film-maker Billy Bob Thornton, who won a screenwriting Oscar for his first outing as a feature film director, 1996’s “Sling Blade”, will premiere the Vietnam War-era drama “Jayne Mansfield’s Car” in the competition.

And Hungarian entry “Just the Wind” looks at violence against the country’s Roma population.

Meanwhile a series of documentaries on the Arab Spring and Japan’s Fukushima nuclear disaster will premiere in the event’s sidebar sections.

But the festival will also be serving up lighter fare, including heart-throb Robert Pattinson in British drama “Bel Ami” about a young man who manipulates Paris’s wealthiest women – played by Uma Thurman, Kristin Scott Thomas and Christina Ricci – to realise his ambitions. It will screen out of competition.