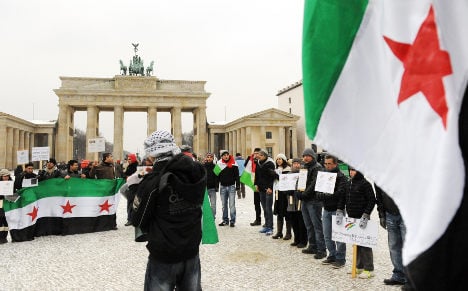 Demonstration against the Syrian regime in Berlin. Photo: DPA

The suspects were identified only as 47-year-old German-Lebanese citizen Mahmoud El A. and 34-year-old Syrian national Akram O., the federal prosecutor’s office said in a statement.

“They are strongly suspected of regularly spying on Syrian opposition figures in Germany for the Syrian intelligence service for several years,” it said.

The prosecutor’s office said around 70 federal and state police officers searched their homes and those of another six suspects.

The two suspects taken into custody will appear before a judge Wednesday who will present them with the arrest warrants dating from January 31.

It is not known whether the suspects are connected to the attack on Syrian opposition member Ferhad Ahma in his home in Berlin in December. Ahma took the attack as an attempt to intimidate him by “henchman of the regime.”

He has been living in Berlin since 1996 and is a member of the Green party. He represents the Kurdish minority in the Syrian National Council, the opposition organization not recognized by the Syrian government under President Bashar al-Assad, since last October.

According to the United Nations, more than 5,400 people have been killed in Syria since unrest began last year.