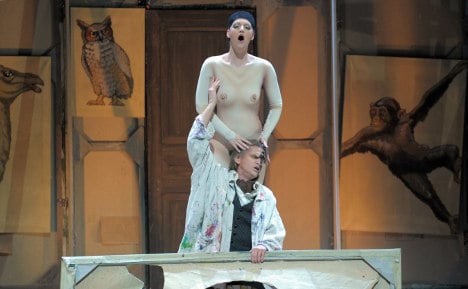 As part of a new publicity drive to spark a passion for opera in young people, the Semperoper gave 51 of the best seats in the house to local kids aged 16 and 17 for Saturday’s first night.

“Because they’re so important to us, I’m happy to give them the best seats up at the front,” Ulrike Hessler, artistic director at the Semperoper, told Monday’s edition of Bild newspaper. “The average age of our audience is around 55. We have to think of the future!”

Hessler is also actively bringing the spark of opera into schools themselves. Citing official statistics that suggest as many as 50 percent of music lessons are being cancelled in Germany’s schools, she said, “I’m sending two colleagues into the schools for five weeks to prepare the classes for the opera.”

But the choice of production for the new educational campaign could raise a few eyebrows. Star director Stefan Herheim’s four-hour production of the modern classic “Lulu” features his leading soprano Gisela Stille in a naked skin suit simulating various sexual positions with a number of men.

The opera, based on the plays “Earth Spirit” and “Pandora’s Box” by Frank Wedekind and first performed in 1937, tells the story of a prostitute who murders men, drives them to suicide, and is finally herself killed by Jack the Ripper.

Sixteen-year-old Lisa from the Bertolt Brecht high school was a little bemused by the production. “It was a little too much sex for me,” she told the paper afterwards. “My classmates also had a lukewarm opinion. But I’ll definitely go to the opera again.”

But despite the somewhat indifferent reaction, according toBild, none of the schoolchildren fled in either of the two intervals, and applauded conscientiously when the curtain fell.