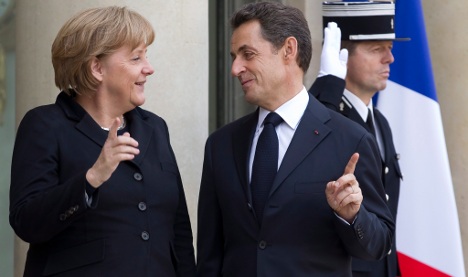 That the pair were to chair their 14th joint Franco-German cabinet session was not unusual, but the joint television interview that they were to give afterwards was billed as an unprecedented cross-border endorsement.

France and Germany were once seen as the twin motor of the European Union, but Paris is now clearly the junior partner, its economy lagging behind by any measure, and Sarkozy has turned to his fellow conservative for ideas.

Sarkozy trails Socialist challenger Francois Hollande in the opinion polls, less than 80 days before the French election, and Merkel fears that a new left-wing French administration will diverge from her austerity plans.

Specifically, Hollande has said he will seek to re-negotiate the hard-won eurozone “fiscal compact” that Merkel sees as essential to binding the single currency bloc together behind her deficit-cutting agenda.

Sarkozy, still smarting from France’s loss of its AAA debt rating, now cites Germany’s success almost daily to justify his own policies, drawing inspiration from both Merkel and her centre-left predecessor Gerhard Schröder.

The leader of Merkel’s CDU party, Hermann Gröhe, has confirmed that Merkel will support Sarkozy “at campaign events in the spring.”

The French and German leaders will therefore give a joint interview to their respective public television networks from Paris, after a meeting of their top ministerial teams in Sarkozy’s cabinet room at the Elysee Palace.

Despite the humiliation of the loss of France’s AAA, the governments believe the fiscal compact and the creation of a eurozone financial safety net in the form of a permanent bail-out fund have contained the debt crisis.

Now, they plan to turn to measures to prevent future crises and restart growth – while keeping a close eye on Greece and other weaker Mediterranean countries in case any backsliding on austerity measures spooks the markets.

Monday’s talks will concentrate on ways of harmonising corporate tax rates across the Rhine and on plans for a new financial transaction tax.

Both support the idea of such a tax – mocked as “madness” by their British colleague Prime Minister David Cameron, who fears it would drive finance houses out of Europe – but differences remain.

Sarkozy is so determined to burnish his credentials as a reformer in the twilight of his first term that he vowed France will go it alone with a 0.1 percent tax by August. Merkel still hopes for a joint European measure.

The French leader also claims German parentage for his plan to boost sales tax in order to fund a reduction in employer social security contributions, a reform he hopes will boost job creation in a stagnant economy.

Many in France have mocked Sarkozy’s new determination to celebrate the “German model” at every turn, but his supporters are convinced his relations with Merkel will pay off in the long run.

“By tying himself to other world leaders, Nicolas Sarkozy reinforces in French minds his image as a statesman… and reduces the Socialist candidate to nothing more than a mere opposition figure,” said a ruling party source.

In an interview with French television last Sunday, Sarkozy repeatedly referred to Germany’s economic success, noting that it had managed to save industrial jobs by keeping corporate payroll charges down.

Sarkozy supported Merkel in 2009 when she successfully ran for re-election, but some in his own camp are worried by the closeness between the pair.

“We must be careful not to appear to be following Germany’s lead,” said Lionnel Luca, a UMP lawmaker, warning against the “whiff of Germanophobia exuded by the Socialist Party for political reasons.”

Hollande has taken a strong lead ahead of the presidential vote, with polls showing him taking 28 to 30 percent of votes in the first round, ahead of 23 to 24 percent for Sarkozy. The first round of the election will take place on April 22 followed by a