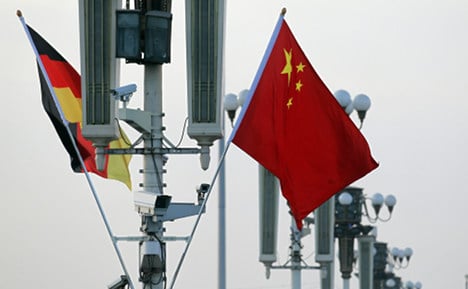 China is “willing to cooperate with Europe to fight the current crisis. Some people say this means China wants to buy Europe,” China’s Premier Wen Jiabao told a German-China business forum in the southern city of Guangzhou. “This concern doesn’t fit reality. China doesn’t have this intention and doesn’t have this ability.”

Merkel, in China for a three-day visit to boost her host’s confidence in Europe, also attended the forum along with executives from the energy, chemicals, engineering, banking and electronics sectors.

There are growing concerns in Europe that a recent wave of investment by Chinese companies and government-backed funds will give Beijing too much influence over struggling European economies.

In the latest deal, China State Grid has agreed to pay €387 million for a 25 percent stake in the national electricity grid of debt-stricken Portugal, Treasury Secretary Maria Albuquerque said Thursday.

European leaders have called on China, which has the world’s largest foreign exchange reserves, to invest in a bailout fund to rescue debt-stricken countries.

China has so far made no firm commitment to provide financial assistance, although Wen said Thursday it was considering getting more involved in bailout funds through the International Monetary Fund.

Analysts say bargain-hunting is behind the recent acquisitions by Chinese companies seeking to expand overseas. The country’s sovereign wealth fund has also sought to diversify away from US bonds.

Merkel, who earlier Friday held talks with President Hu Jintao and the country’s top legislator Wu Bangguo in Beijing, had said that she would raise human rights issues during her visit.

Rights lawyer Mo Shaoping, whose clients include jailed Nobel Peace Prize winner Liu Xiaobo, told AFP Friday that police had prevented him from meeting with Merkel at a reception at the German Embassy on Thursday.

Mo said police told him he was not allowed to attend the meeting due to concerns over social stability ahead of a key Communist Party meeting slated for late this year that will usher in a 10-yearly leadership transition.

The German embassy in Beijing did not immediately comment on the absence of Mo, who also defended the jailed rights lawyer Gao Zhisheng.

Merkel’s visit to Guangdong province will include a meeting with Gan Junqiu, the state-backed Catholic bishop of Guangzhou – the provincial capital – a German diplomatic source said, before returning to Germany on Saturday.