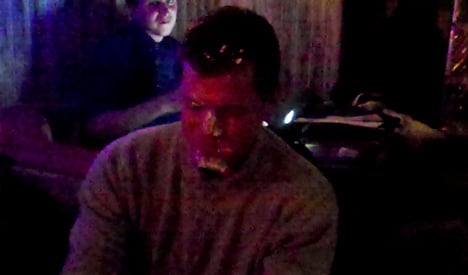 Guttenberg – who was defence minister between October 2009 and last March when he resigned amidst a plagiarism scandal – was discussing internet issues with Stephan Urbach in a café in the Friedrichshain area of the capital, when he was attacked with the cake.

“We were sitting together when, at about 8.15 p.m. some people came in and shoved a cake into Mr. Guttenberg’s face,” Urbach said. “But Mr. Guttenberg took the incident in a very relaxed manner.”

A video posted on Youtube.com and embedded on a site calling itself “Hedonist International” shows Guttenberg looking surprised as the large cake is shoved in his face. But he appears to smile and laugh a bit afterwards and even licks some of the cream from his fingers.

A message posted on the website called the aristocratic Guttenberg “the lying baron” and chastised him for his new job as advisor to the European Commission on internet issues. It said the internet hacking collective Anonymous shared responsibility for the attack.

But on his Facebook site Guttenberg responded with good humour. “Hooray, a pie attack!” he wrote. “I thought I would starve in Friedrichshain.” He said he would have preferred a cheese cream cake to the Black Forest Gateau that was used in the attack.

Guttenberg was viewed as a rising star within the centre-right Christian Social Union until it was revealed last year that he had plagiarised large sections of his doctorate and he eventually resigned in disgrace. He became known as “Baron Cut-and-Paste” and “Googleberg” as people ridiculed his fall from grace.

He then moved to the United States where he worked for a think tank, but his move last December to the European Commission job has fuelled talk of a political come-back. But he recently told his Christian Social Union party he would not be prepared to stand as a candidate in the 2013 parliamentary election.