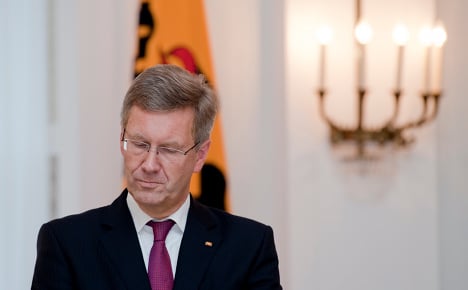 A new poll conducted for the ARD television network showed that 54 percent of the population want him to leave, with just 16 percent considering him trustworthy. Just 33 percent of those asked said they were happy with the president’s work, the poll said.

It is the first time since the Wulff affair began in December that a majority of Germans said he should step down.

The criticism from opposition politicians is unrelentingly scathing, with Social Democrat leader Sigmar Gabriel repeating his charge that Wulff is no longer in a position to hold his job.

“Christian Wulff has already ruined the president’s only instrument of power, that of the credibility of his word. He is actually no longer the president – he is just living in Bellevue Palace,” Gabriel told the Sächsiche Zeitung on Friday.

This week Berlin prosecutors said they were investigating allegations that Wulff and his wife Bettina had been given free use of an Audi Q3 car last summer – months before that model was available to the general public.

Wulff’s representatives said Thursday that the story was false and obtained an injunction from a Cologne court banning two newspapers from reporting further on the matter.

The president has been under pressure to explain himself since last December when it was revealed that as Lower Saxony premier in 2008, he had failed to reveal a soft loan of €500,000 from prominent regional businessman Ergon Geerkens.

Since then, there has been a stream of reports about more alleged wrongdoing by the president – from pressuring reporters not to report on the loan, to getting free airline upgrades.

Although prosecutors have refused to file criminal charges against Wulff, his former spokesman Olaf Glaeseker and event manager Manfred Schmidt are under criminal investigation for alleged corruption.

Though the ARD poll showed Wulff’s popularity has been steadily decreasing – at the beginning of the scandal 73 percent of Germans believed he should not resign – Chancellor Angela Merkel remains well-liked despite her continued support of the president.

Sixty-four percent of Germans are pleased with her job performance, putting her just below Finance Minister Wolfgang Schäuble.