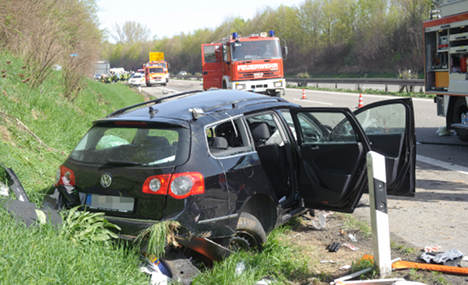 A 35-year-old man who deliberately drove the wrong way down a south German motorway and crashed head-on into a car, killing one person has been jailed for 12 years but may be held indefinitely under preventative detention rules.

The man, who has serious psychiatric problems, and an associated criminal history, told the court in Tübingen he had felt completely disoriented on April 10 last year and was scared he was being chased by Hells Angels before he suddenly realised he was driving the wrong way down the road.

Travelling at 150 kilometres an hour on the motorway between Reutlingen and Stuttgart, he smashed into a car carrying a 43-year-old man, his wife and their 11-year-old daughter. The man was killed instantly; his wife and daughter were left seriously injured.

The 35-year-old, who was himself also injured in the crash, denied wanting to kill himself, but a court expert convinced the judge that he was scared his girlfriend was going to leave him, and that he wanted to die – and accepted the risk of killing other people by choosing to do it this way.

Sentencing him to 12 years, with a preventative detention ruling which means he would be held for psychiatric treatment even after he completes his sentence, the judge said, “This is certainly a harsh verdict from your perspective. But you have incurred much guilt.”

He said the family he hit in the car had been destroyed by the accident. A psychiatric expert witness said it was doubtful that the man could ever be made healthy enough to be released.

There are around 1,700 incidents of wrong-way driving each year, many of which result in crashes, according to government figures.

Much of the time they are due to disoriented and confused drivers making mistakes – or those who have missed an exit deciding to risk simply deciding to turn around to try to save time.