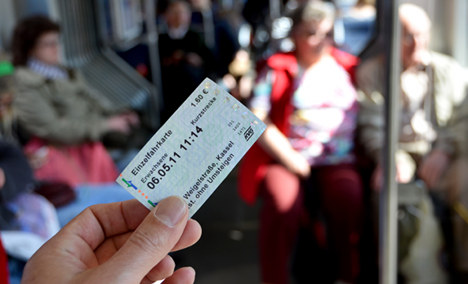 Under the proposal, those caught for the first time without a valid ticket would have to pay €60. If they are caught multiple times, they could face increasing fines and criminal charges. Penalties are currently capped at €40.

The demand by the Association of German Transport Companies (VDV) is nothing new. In fact, in 2009 the association asked for similar fine increases, which were rejected by state transportation ministers.

Back then the VDV estimated that approximately three percent of passengers travelled without a ticket on local bus, metro and train lines. Now, that percentage has risen slightly to 3.5 percent, the organisation told the Süddeutsche Zeitung this week.

“Now we’re at the point that potential fare evaders organise online. So riding without a valid ticket is become perceived as harmless,” Oliver Wolff said.

Germany is especially fertile ground for those who want to use public transportation without paying because, unlike many other countries, there are often no barriers to go through before boarding trains.

Occasionally ticket controllers ask to see tickets, but evaders can sometimes ride for months before being caught.

Wolff estimated that transportation providers lose out on €250 million in revenue to fare evasion and have to invest €100 million in hiring ticket inspectors to try to control the problem.

“Honest customers pay the bill in the end through higher ticket prices,” he said, saying that municipalities and the actual transportation companies are also hurt by the fraud.