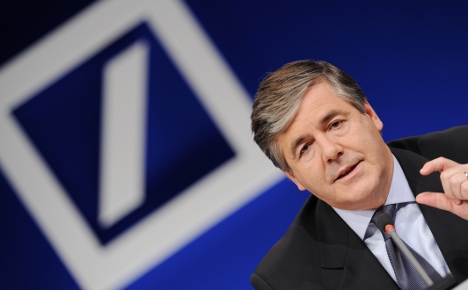 The financial powerhouse said in a statement it booked net profit of €186 million ($245 million) in the fourth quarter.

After payments to minority shareholders, the bottom-line figure amounted to €147 million, down 76 percent year-on-year.

At a pre-tax level, Deutsche Bank was even in the red, with a loss of €351 million in the October-December period, but favourable tax effects pulled it back into the black.

The numbers disappointed investors and Deutsche Bank shares were the biggest losers on the Frankfurt stock exchange on Thursday, showing a drop of 1.37 percent in a generally firmer market.

The group explained that while its classic high-street banking business performed well, its investment banking activities were hit by the debt crisis.

“The European sovereign debt crisis had a particularly marked effect on activity levels in Europe, where Deutsche Bank has a substantial portion of its business.”

Revenues in the investment banking fell by 26 percent year-on-year in the October-December period, while revenues in the classic banking division were up 22 percent, thanks largely to the inclusion of Postbank, acquired in 2010.

Deutsche Bank said it raised its loan-loss provisions by a third to €540 million in the fourth quarter.

In addition, the bank took additional writedowns of €144 million against its holdings of Greek debt and also took a €380 million hit for litigation.

The increase in revenues came “mainly as a result of revenues from businesses acquired in 2010, namely from Postbank and, to a lesser extent, the private bank Sal. Oppenheim and the commercial banking activities acquired from ABN Amro in the Netherlands,” Deutsche Bank explained.

“Once again, Deutsche Bank has proved its ability to deliver substantial earnings in challenging conditions,” said chief executive Josef Ackermann, who is scheduled to step down at the end of May after 10 years at the helm.

“In 2011, our classic banking business produced record earnings, thus counterbalancing the impact of weak markets in investment banking. We also significantly strengthened our capital base, boosted our liquidity reserves and reinforced our funding position,” said the Swiss-born executive.