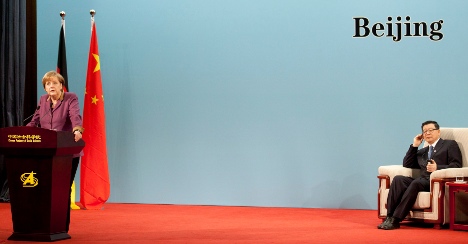 During Merkel’s three-day trip she will hold talks with Chinese leaders that are expected to be focused on Iran, Syria and the eurozone crisis.

In a speech to the Chinese Academy of Social Sciences, Merkel urged China – the world’s second-biggest economy – to use its influence on Iran, saying Tehran needed to be more “open and transparent” about its nuclear ambitions.

A German government source said earlier the chancellor would also call on Beijing not to take advantage of Europe’s ban on Iranian oil – imposed on Tehran over its nuclear stance – to boost its own imports of the resource.

The United States, the European Union and others have ramped up sanctions to target Iran’s oil industry and central bank since a UN atomic watchdog report in November raised suspicions Tehran had done work on developing nuclear weapons. Iran insists its nuclear drive is for peaceful purposes and that the International Atomic Energy Agency report was based on “forgeries” provided by its enemies.

Merkel, who will meet President Hu Jintao on Friday, also touched on Syria in her speech, saying it was “important that the international community speak with one voice at the United Nations.”

The German leader is expected to ask for Beijing’s support for a UN Security Council resolution against Syria, where fighting between President Bashar al-Assad’s security forces and rebels is escalating.

On bilateral trade between China and Germany – which reached $169 billion in 2011, an 18.9-percent increase from the previous year – Merkel called for a level playing field for German firms operating in China.

“As German entrepreneurs, we want to be treated on an equal footing with Chinese companies,” she said.

Merkel’s trip comes just days after deadly unrest hit China’s Tibetan-inhabited areas and she indicated that human rights would be on the agenda during the visit.

“Germany has always advocated an open, political dialogue, including on controversial issues such as human rights and building a state of law,” she said.

On Friday, Merkel will fly to the southern province of Guangdong, where nearly 500 German companies are already present, with Wen and executives from the energy, chemicals, engineering, banking and electronics sectors.

Rare earths – valuable elements that are used in the production of high-tech products and which are of “very great importance for the German economy” – will also be on the agenda, a German government source said.

China has been accused of deliberately restricting rare-earth exports to drive up prices and force manufacturers onto its shores, but Beijing says it limits them for environmental reasons to reduce mining-related pollution.

But Merkel’s three-day trip is also aimed partly at boosting confidence in the eurozone after a sovereign debt crisis that has seen a wave of credit-rating downgrades and brought Greece to the brink of bankruptcy.

Europe is China’s top export market and Beijing has watched with increasing concern as the debt crisis has deepened, repeatedly urging European leaders to get a grip on the situation.