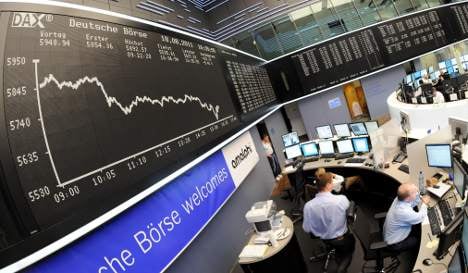 “Deutsche Börse and NYSE Euronext have been informed that the European Commission today has decided to prohibit their proposed business combination,”

the German company, which operates the Frankfurt stock exchange, said in a

The EU Commission had been widely expected to block the tie-up – which would have created the world’s largest market operator – even though Deutsche Börse and NYSE Euronext had offered to separate some of their derivatives operations to allay competition concerns.

“Despite the remedies offered by the companies, the European Commission concluded that the combination would significantly impede effective competition and declared the concentration to be incompatible with the common market,” the statement said.

“It is inconsistent with and even contradictory to the Commission’s stated aim of expanding regulation on the over-the-counter derivatives market,” he said.

“By blocking the merger plans, they are preventing the creation of a Europe-based globally competitive stock exchange. The combined group would have been the ideal partner for the European regulatory authorities and would have contributed to the creation of standardised, transparent and stable markets in Europe,” Francioni said.

The proposed merger had similarly sparked controversy in the United States as it would have handed over the New York Stock Exchange to foreign owners.

A deal would have seen Deutsche Börse shareholders own 60 percent of the new combined firm.

NYSE Euronext, too, said it was “disappointed and strongly disagrees with the EU decision, which is based on a fundamentally different understanding of the derivatives market.”

“Our merger would have created a high standard for transparency, stability and efficiency in the global capital markets, and we proposed significant and tangible remedies designed to address the European Commission’s concerns with the transaction,” said NYSE Euronext chairman Jan-Michiel Hessels.

“But as we made clear throughout this process, we would not agree to any concessions that would compromise or undermine the industrial and economic

logic of the proposed combination.”

Both sides insisted they would now focus on building on their successful standalone strategies.

“Deutsche Börse is well equipped and has sufficient strength to grow and be successful without the merger,” Francioni said.

Analysts said that NYSE Euronext would have stood to gain more from the tie-up.

Frankfurt-based Deutsche Börse is better positioned than the Americans because it is active across the whole range of activities, from its Xetra electronic stock-trading platform, to its Eurex derivatives market and its Luxembourg-based clearing subsidiary, Clearstream.

Deutsche Börse generates just 12 percent of its revenues from the highly competitive, low-margin stock-trading activities, while in the case of NYSE Euronext it accounts for around half of overall business.

There has long been talk of global consolidation in the stock markets sector, but so far national interests and competitive concerns have torpedoed planned alliances, for example between those in London and Toronto, and Sydney and Singapore.