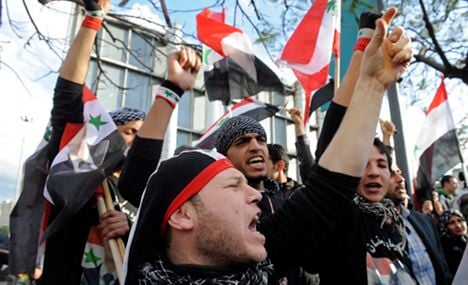 “The situation is unacceptable and it even became worse in the last couple of days,” Westerwelle said after talks with his Egyptian counterpart Mohammed Amr.

“It’s a drama what we are seeing at the moment in Syria. The Security Council of the United Nations must act,” he said ahead of a council session on the crisis to be joined by his British, French and US counterparts.

On Monday alone, almost 100 people, including 55 civilians, were killed during a regime assault on the flashpoint central city of Homs, said the Syrian Observatory for Human Rights.

The unrest, which also saw 25 soldiers killed, marked one of the bloodiest days of a revolt that erupted in March, inspired by a wave of Arab uprisings that last year overthrew authoritarian leaders in Egypt, Libya and Tunisia.

“The violence by the (Bashar) al-Assad regime must be condemned by the Security Council – this is for us absolutely important,” Westerwelle said.

“A resolution should be passed urgently and I hope that we can make progress in this direction in today’s session and in the next days.”

A draft resolution put forward by Morocco on Friday calls on Damascus to put an immediate stop to violence against protesters and for Assad to hand power to his deputy.

The text seen by AFP on Tuesday also stresses there will be no foreign military intervention in a conflict that the United Nations said earlier this month had already killed more than 5,400 people since last March.

Russia, a veto-wielding Security Council permanent member, has exasperated the West by insisting it will not back any resolution calling on Assad to step down.