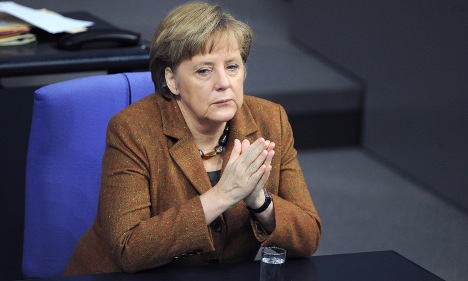 The debate must be on “how Europe can help Greece accomplish the tasks given to it,” Merkel said on arrival at an EU summit after Greek officials and some European leaders rejected the proposal.

“But all of this will only work if Greece and other (EU) member states talk about it. This is why I do not want a controversial debate but a discussion that achieves success,” she said.

The German suggestion to put Greece under stewardship cast a shadow over the summit which is aimed at sealing a fiscal pact to toughen budget discipline across the EU, finalising a rescue fund and finding ways to counter recession.

The idea that Greece might cede budget control to the EU was contained in a German submission to its eurozone partners first revealed late Friday by the Financial Times and confirmed by European sources.

Under the radical plan, denounced by Greek officials, a commissioner appointed by the 16 other eurozone finance ministers could veto budget decisions made by Athens.

Rösler, who is also Germany’s vice chancellor, told the daily Bild that the European Union should step in to ensure that Greece toes the line of budget austerity as it struggles to emerge from a crippling debt crisis.

Rösler said that patience in Germany, the paymaster for the eurozone’s bailouts, for Greece was wearing thin.

“Time is running out,” he said. “There can only be more assistance if the Greek government finally carries out the necessary reforms. The Greeks must finally send a clear message that they mean what they say,” he added.