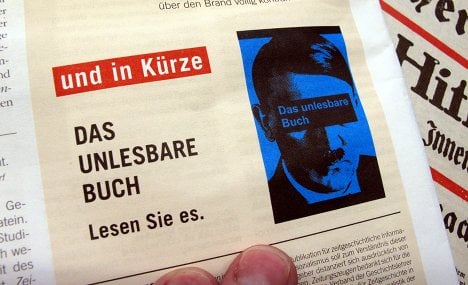 The Munich District Court issued an injunction on behalf of the Bavarian state Wednesday preventing British publisher Peter McGee from following through with his plan to begin distributing portions of Adolf Hitler’s book on Thursday.

McGee said portions of the book would now be distributed with his Zeitungszeugen (newspaper witnesses) product of Nazi-era newspaper reprints, but it would be blurred out so Germans can’t read the words.

“We must ensure that our main publication Zeitungszeugen is not put at risk,” McGee said, said, saying that the blurring would prevent the government from seizing his publication.

The Munich court ruled that Bavaria still controls the copyright to Mein Kampf for the next three years, meaning only the state can approve its publication in Germany, a decision Bavarian Finance Minister Markus Söder welcomed.

“It is good that the publisher is now legally forbidden from spreading this diatribe,” he said. “The Free State of Bavaria will continue to defend its copyright.”

McGee said he would still allow Germans to request uncensored excerpts via mail order, but it was not clear if that offer would stand up to legal scrutiny.

Bavarian officials have taken action against McGee before, seizing copies of Zeitungszeugen several years ago, although its sale has since been ruled legal.

The Mein Kampf plans raised the hackles of politicians and activist groups – the book’s publication is generally banned in Germany, although its possession is legal and it is widely available on the internet and in other countries.

McGee had insisted he was just trying to show people the full horror of Hitler’s world view.

“It is about time that the broader public is given the opportunity to deal with the original text,” he told Der Spiegel magazine recently.