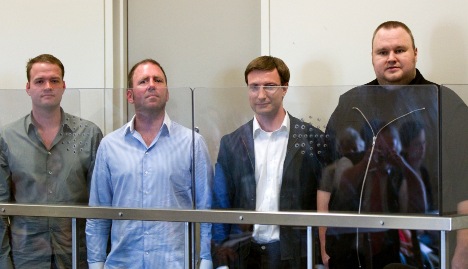 Denying an application for bail, Auckland Judge David McNaughton said the German had the money and shady connections to slip out of New Zealand if he wished, following days of media revelations about his playboy lifestyle.

The founder of the file-sharing website Megaupload.com has been in detention since police raided his vast “Dotcom Mansion” in Auckland on Friday, spending his 38th birthday on Saturday in a remand centre, as part of a major US probe.

The internet tycoon appeared upbeat as he was ordered to remain in custody until a US extradition application is formally launched on February 22, winking at supporters in the court with his hands on his hips.

But his lawyer Paul Davison said Dotcom was disappointed and would appeal the bail decision as soon as possible, while his co-accused’s lawyer predicted a “fierce battle” against the US allegations.

Revealing that the heftily built businessman was on medication for diabetes and hypertension, Davison said there was no danger Dotcom would flee because his assets had been frozen and his family remained in Auckland.

“He has no intention whatsoever of endeavouring to leave New Zealand,” Davison told reporters.

The judge raised concerns that Dotcom, who US authorities allege received $42 million from his Internet empire in 2010 alone, had passports and bank accounts in different names.

He said that, given Dotcom’s vast wealth, there was no guarantee he did not have funds hidden away which could be used to escape the country.

In addition, he said an unlicensed sawn-off shotgun found in a “panic room” to which Dotcom retreated when police swooped on his home raised questions about possible crime links.

“It suggests a level of criminality which to my mind could easily extend to exploiting criminal connections to obtain false travel documents and leave the country undetected,” he said.

The raid on Dotcom’s home netted a 1959 pink Cadillac, numerous other luxury cars and valuable artworks – all of which the US Justice Department and FBI allege was obtained through “massive worldwide online piracy.”

They indicted Dotcom and six others last week, accusing them of generating more than $175 million in criminal proceeds and costing copyright owners $500 million-plus by offering pirated copies of movies, TV shows and other content.

Judge McNaughton noted that Dotcom was accused of the largest internet copyright piracy case in US history, and prosecutors had vowed to seek maximum penalties of 20 years on racketeering and money-laundering charges.

He said that might prove a possible motive for Dotcom, who legally changed his name from Kim Schmitz, to try to reach Germany – which would provide a safe haven as it refuses to extradite its citizens to the United States.

He said prosecutors argued this had already occurred with one of Dotcom’s co-accused, Sven Echternach, another German national who travelled to his homeland from the Philippines after arrest warrants were issued in the case.

McNaughton, who reserved a decision on bail for three of Dotcom’s co-accused until Thursday, said extradition proceedings were likely to take “some months.”

Lawyers for the three men, Guy Foley, said they would fight allegations they were part of a criminal conspiracy to undermine copyright laws.

“This is likely to be a fierce battle over copyright issues, it is not an open and shut case by any means,” he said.

Auckland lawyer Rick Shera said that under New Zealand law, US authorities can request extradition for an alleged offence if it is also regarded as a crime in New Zealand and attracts a jail term of 12 months or more.

But he said defence lawyers were likely to argue that Dotcom’s Megaupload was a legitimate file-sharing site, not a criminal enterprise.

“Given the resources available to him (Dotcom), it’s not going to be resolved anytime soon,” he told news agency AFP.