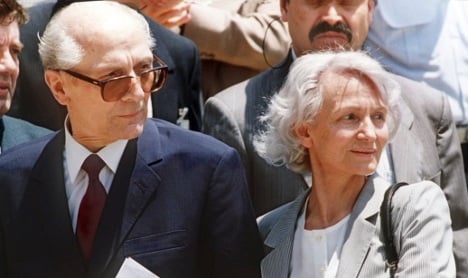 According to a report in news magazine Der Spiegel, the German intelligence agency (BND) collected a number of intimate details about Honecker’s marriage during his reign as head of state of the communist German Democratic Republic (GDR) from 1971 to 1989.

He reportedly made sure that Margot, who served as the GDR’s education minister from 1963 to 1989, was invited to Yugoslavia when he made a state visit to Japan in 1981, so that he could find some peace from his wife.

According to the files, the marriage to Margot was apparently already over by this time, and was only being held together “for party and state purposes.” While Erich was reportedly having an affair with one of his co-workers, Margot was linked to one of the country’s top economists Günter Mittag.

The BND also believes that the politburo pressured Erich into marrying Margot in 1953 “so that his frequent affairs with young girls would have an end.” The couple only married after the birth of their daughter Sonja in 1952 – which happened during Erich’s first marriage to Edith Baumann.

The files released by the BND also reveal more banal details. In January 1978, one agent reported that Honecker had accidentally given his grandson two left ski boots for Christmas.

In December 1981, meanwhile, the GDR’s state authorities were apparently charged with scouring the country to find a dog for the leader, who was addicted to game hunting. A three-and-a-half year-old short-haired pointer was eventually found near Erfurt.

Margot was herself a powerful member of the GDR’s political elite, and was feared and mocked as the “lila Drache” (“purple dragon”) for her hair colouring and hardline positions – she famously introduced military training to the GDR’s high school curriculum in 1978.

Despite their marital difficulties, the couple fled to Chile together after the fall of their government in 1989.

Honecker died of liver cancer in 1994 in his self-imposed exile. The 84-year-old Margot still lives in Santiago, Chile with Sonja. She is said to still have his ashes.