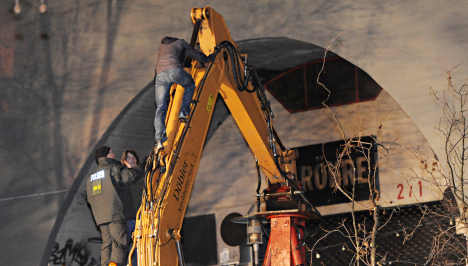 On Saturday, rally organisers said some 4,000 people gathered to protest the station’s construction, while police estimated the number of demonstrators at 1,200.

About 40 protesters tried to block teams from clearing the trees, but a police spokesman said officers were able to disperse the crowd. The work was completed by 6 a.m. on Sunday but had to be stopped twice when two demonstrators climbed on top of demolition equipment.

A spokesperson for Parkschützer, an initiative that aims to preserve the park, criticised the action, saying the trees should not have been taken down due to wind and poor visibility.

Matthias von Herrmann of Parkschützer took aim at the state government in Baden-Württemberg.

“It is a travesty when (state) premier Kretschmann continues to preach about how the government has to adhere to the law, but then police are out at a construction site without a building permit,” he said.

The multi-billion-euro project aims to transform the Baden-Württemberg capital into a major European transport hub. The station has sparked a wave of protests.

Deutsche Bahn wants to replace Stuttgart’s existing train station with an underground one that it says would greatly improve links between Paris, Vienna and ultimately Budapest.