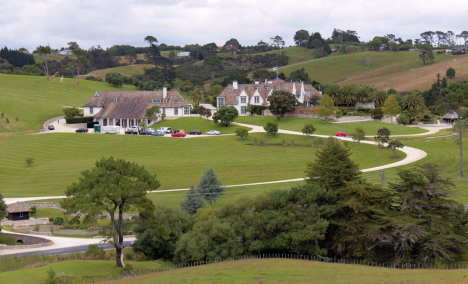 “Once they were in the room, they found Dotcom near a weapon that looked like a saw-off shotgun,” he said, in a statement issued on Saturday.

Schmitz was living in a mansion in Coatesville, north of Auckland, New Zealand, which was raided by police.

Officers flew in with two helicopters to conduct the raid but upon their arrival, Schmitz locked all doors to the house electronically. “While police disabled the locks, he barricaded himself inside a special room in the house,” Wormald said.

The 37-year-old Schmitz is due to be extradited to the United States. The US Justice Department has accused him and six others, including three Germans, of earning more than US$175 million (€135.6 million) illegally.

The Megaupload site has since been shut down. It allowed users to upload files, including copyrighted material, which could then be shared for free on the Internet.

The site was popular because it facilitated the distribution of television shows, music and movies – often before they were even released. The government charged that the site would selectively comply with takedown requests by copyright holders to maintain a veneer of legality, while illegal content remained on the site.

Police confiscated several luxury cars, including a Rolls Royce Phantom and a 1959 Cadillac, as well as paintings and account documents.