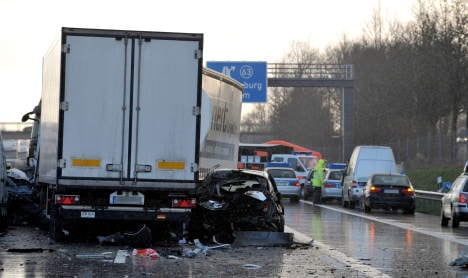 Some drivers said they were blinded by the sun, and were unable to see the vehicles in front of them until it was too late.

It took police several hours to clear the roadway. They said the low-lying sun left several drivers unable to see the cars in front of them – and the wet roadway made braking difficult.

“The road was wet, the sun was extremely low – I could hardly see anything,” driver Henrik P. told the Bild daily.

“When I saw the accident, I wanted to swerve into the median, but I was unable to do so, and I ran into the car in front of me. It all happened so fast.”

Several vehicles were involved in two initial crashes, but the pile-up grew larger as other drivers tried – and failed – to stop. Two people were seriously injured when a lorry collided with a trailer stopped ahead, smashing several cars together.

Police said those two passengers were airlifted to hospital.

Two German soldiers were on their way to spend a weekend in Osnabrück when they were caught in the crash. Johann F. told Bild that he could barely see due to the sun.

“That’s why I didn’t see that the car in front of me was already stopped, and I crashed into it,” he said. “It was awful.”