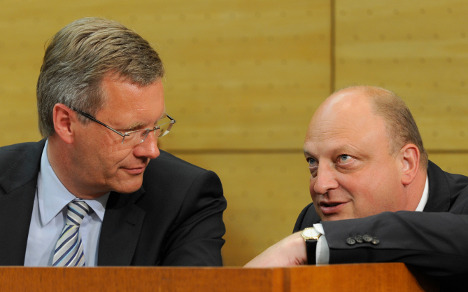 Investigators looking at corruption allegations against the two men raided Glaeseker’s house near the Lower Saxony capital of Hannover as well as Manfred Schmidt’s offices in Berlin and Switzerland, removing computers and documents.

Public prosecutor Hans-Jürgen Lendeckel said on Thursday that Glaeseker and Schmidt were suspected of corruption as a result of media reports that Glaeseker had supported a series of events organised by Schmidt between 2007 and 2009 and had in return been given several holidays in Schmidt’s properties.

Glaeseker was spokesman for the Lower Saxony state government at the time, and should probably have not accepted expensive presents.

Wulff fired Glaeseker shortly before Christmas without publicly giving a reason, after years of working closely together. He was often described as Wulff’s closest advisor.

Prosecutors had said on Wednesday that although they would not be investigating Wulff on suspicion of criminal activity, further checks would be carried out on Glaeseker.

It is now five weeks since the start of the row over €500,000 Wulff borrowed from the wife of a businessman friend while state premier of Lower Saxony in 2008, and failed to reveal publicly. The businessman Egon Geerkens then accompanied Wulff on three official trips, the Financial Times Deutschland said on Thursday.

Wulff subsequently transferred the loan to a bank with which he had dealings while premier of Lower Saxony state and made angry phone calls to newspaper editors about the publish the story.

Wulff even brought a number of fellow Christian Democrats out against him by promising in a televised interview that he would publish a long list of journalists’ questions and his answers on the matter, only for his lawyer to refuse to do so.

Only after several media operations granted formal permission did he post the 240-page dossier of questions and answers on the internet on Wednesday evening.

A former judge at Germany’s constitutional court, Dieter Grimm said on Thursday it would be best for Wulff to resign.

He said Wulff could no longer address matters of political probity without fingers being pointed at him.

“That should lead to the understanding that a timely resignation is better than remaining half in office, in his own interests as well as the general good,” Grimm wrote in the paper.