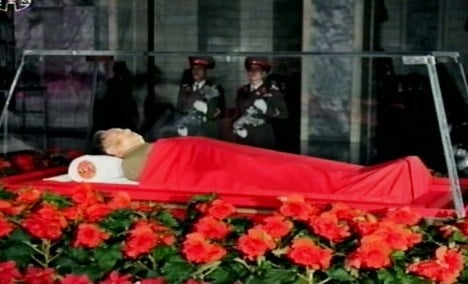 The “natural wonder” occurred on December 20, the day after news of Kim’s death was announced, the agency announced on Thursday.

It said a titmouse, a small songbird, stayed by the embassy entrance for an hour, pecking at the glass, while a floral plant was in full bloom throughout the mourning period despite chilly winter weather.

“It seemed that upon hearing the sad news of the demise of the outstanding great man the bird flew to the mourning station to express condolences and flew away after standing vigil,” the agency reported.

The plant, meanwhile, “came into bloom in such cold winter day in token of mourning his demise”.

A dove-like bird was said to have brushed the snow off a statue of Kim while owls and a Manchurian crane were also said to have exhibited grieving behaviour.

Ice reportedly cracked thunderously around Kim’s claimed birthplace at Mount Paekdu while a glow was seen atop the mountain’s Jong-Il Peak.

Propaganda organs have built a vast personality cult around the Kim dynasty, which has ruled the country since its creation in 1948. They are sometimes credited with near-supernatural powers.