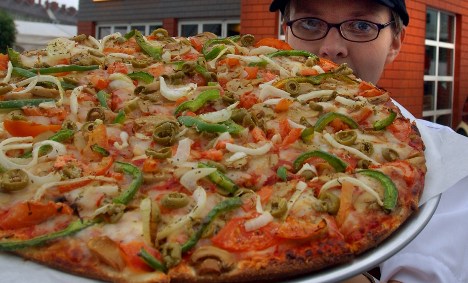 Scientists at the Max Planck Institute for Psychiatry in Munich showed that levels of a hormone which controls appetite increase when a person sees images of food.

They have suggested that people trying to lose weight should avoid seeing pictures of delicious food as far as they can.

The researchers led by Axel Steiger took eight healthy young men for the study, and measured the levels of ghrelin in their blood. The hormone not only controls appetite but also plays a role in digestion.

They recorded a rise in ghrelin levels when the men had been showed photos of pizza, schnitzel, ice cream or chocolate cake – despite the fact that they could not be physically hungry, having recently eaten breakfast, Die Welt newspaper said.

Other hormones associated with the metabolism such as leptin and insulin were not affected by the pictures – and levels of ghrelin did not change when the men were shown non-food pictures.

“Our brain processes these optical stimuli and without any conscious control, the physical processes are started which control our feelings of appetite,” said Petra Schüssler, one of authors of the study, in a statement. “This is a mechanism which could lead us to eat a piece of cake even though it is only two hours since breakfast,” said Petra Schüssler.

The results are published in the scientific journal Obesity.