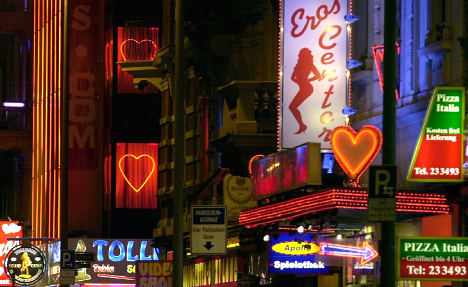 Sandor P. had brought destitute women to Germany from his homeland Hungary and force them into prostitution, attacking them with a electric-shocker if they earned him less than €1,000 a day each, the Frankfurt District Court heard on Tuesday.

He would also often rape the women with his metal-enhanced penis, the court heard.

“We were told this would make a rape even more painful for the woman,” a spokesman for the court told The Local.

The 29-year-old and his father bought some of the women from their families for about €2,000 and forced them to work around the clock, the Frankfurter Rundschau reported on Wednesday.

Once he had beaten them into submission, Sandor P. imprisoned them in the “Eros Center” brothel in the red light district near Frankfurt’s main train station – an area considered a tourist attraction by some.

The women were not allowed out of the brothel and had to have sex with any paying customer from midday until 7a.m.

They were not given Hungarian customers so they could not tell anyone of their plight.

Sandor P. repeatedly kicked one pregnant women after he had “bought” her – although he had hoped to kill her baby the child survived, the court heard.

The public prosecutor bringing the case along with five of the women as joint plaintiffs, estimated that Sandor P. made more than €500,000 from the women.

Prosecutors are calling for him to be locked up under special conditions which would include preventative detention, meaning he would be kept in prison for longer than his sentence.