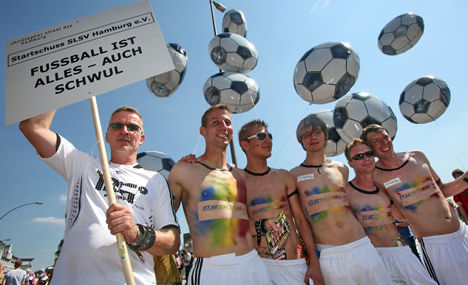 Players should have the “courage to declare themselves,” Theo Zwanziger said Tuesday during a public discussion on sexuality in elite sports at the Sportschule Hennef near Cologne. He said the situation for gay players in football was much better than it had been.

The comments come amid increasing criticism of star footballer Philipp Lahm over remarks he made earlier this week implying that Germany is not ready for gay athletes.

“Football is like earlier gladiatorial combat. Sure, politicians can now come out as homosexuals. But they don’t have to play in front of 60,000 spectators week after week,” Lahm said, according to the Westdeutsche Allgemeine Zeitung.

“I don’t think society is yet far enough to accept gay footballers for granted, as it is now possible in other areas.”

Lahm’s words echo statements he made in his book released last year and in earlier interviews with the media. Although he is widely viewed as one of the most tolerant athletes in German sports, he has advised footballers to stay in the closet to protect themselves.

But Zwanziger joins other prominent sporting figures who have said that gays would be accepted in sports.

National footballer Mario Gomez told Bunte magazine in 2010 that if they outed themselves, gay athletes “would then play as though they’ve been unshackled.”

On Tuesday Zwanziger said good players would be respected no matter their national origin or sexual orientation.

“I think fans in the stadium orient themselves toward performance,” Zwanziger said.

No gay male football player in Germany’s top league has yet come out of the closet.