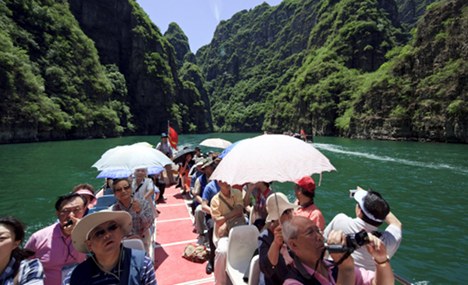 The amount Germans spend on travel is expected to increase in 2012, possibly to a new record of €62 billion, said Commerzbank economist Jutta Kayser-Tilosen.

“The debt problems in the eurozone have, up to now, not prevented the Germans from travelling,” Kayser-Tilosen said, citing continued high employment numbers and wages.

The news is also good for German businesses, which have increased travel budgets to about €9 billion for their employees after several years of cutbacks.

Commerzbank stressed that though things are looking good for the tourism industry abroad, a lot is riding on the state of Europe’s economy.

Worries about the debt crisis, new burdens on taxpayers or long-term inflation could prompt Germans to not travel at all or take their holidays domestically – with Germany remaining their favoured destination.

But the weakness of the euro could make Germany a more attractive destination for foreigners – it is already the eighth most popular in the world.

Tourists spent more money in Germany in 2011 than the year before – approximately €27.4 billion, an increase of about 5 percent. Most tourists came from European countries, although an increasing number have been coming from rising Asian powers like China.

Commentators have been saying for years that as the Chinese economy gains strength, its people travel the world and become coveted for their tourist dollars.

That prediction appears to be coming true – their spending could outstrip the Germans’ within the next two years, Kayser-Tilosen said.