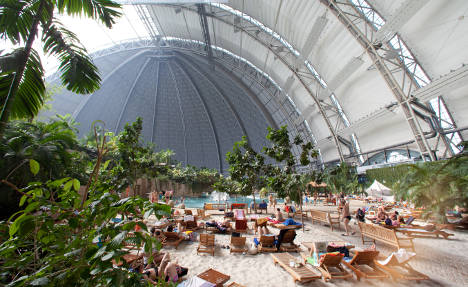 Scarf, a woolly hat and gloves, a sarong, swimming costume and sandals; remembering what not to forget when preparing for a day at the Tropical Islands can be somewhat confusing.

The cold weather clothing has to be worn for the trip into the Brandenburg countryside, only to be shed as fast as possible once inside a giant dome, where it is a steady 26 degrees Centigrade.

The enormous building, created as a hanger for cargo airships which were never built, is said to be one of the largest domes in the world by volume. While the idea for airships was soon punctured, the holiday alternative has proved to be a surprisingly enduring draw for the area around Krausnick.

Inside there is a little hill in the middle, covered in tropical trees and bushes, with waterfalls and swimming pools dotted around – and a beach stretching along one side.

The beach is made of real sand and slopes down into two large swimming pools where the water is a suitably tropical temperature. The back wall is even painted with sky, but the illusion it creates is only momentary.

After a couple of months of rotten north European weather, those in need of a warmth and light fix can certainly find it here, and a wander down the pathways that snake through the tropical foliage can be surprisingly relaxing.

The birds which root around in the undergrowth and the turtles in a pond are a nice touch, and kids sick of being wrapped up in layers of winter clothing can strip off and race around in swim suits.

Looking up through palm fronds the brain cannot quite comprehend how high the eyes can gaze before hitting the roof, the huge curves of geometric-patterned surface creating a strange sky.

Frighteningly high water slides provide high-speed splashy action entertainment, while there is also a huge range of spa facilities, an adventure playground for children and even rides in a helium balloon.

Licking a melting ice cream while wearing just the necessaries and sitting under a palm tree – in mid-winter, within easy reach of home – does have a certain something.

There is even a camping site where one can stay the night in neatly pitched cream-coloured canvas tents, as well as a range of evening entertainment shows.

One has to hunt around to find a gap in the Truman Show type facade – but near the toilets we found a window through which we, in our swimming costumes and sandals, could look at the chilly conditions and dark skies outside. The surprise was quickly replaced by delight at the contrast.

The only trick the creators have missed is that dreams of running away to a tropical island usually involves the word “deserted” – and this construct is of course full of people.

And once the warmth had soaked through to the bones, and the water slides had been whizzed down so many times that the water up the nose outbalanced the adrenaline rush, the smells of spaghetti and schnitzel from the restaurants and the fake tropical carvings started to weigh heavily.

After changing back into outdoor clothes and rushing out the door in order to avoid overheating, the chill of the air and the desolation of the former airfield on which Tropical Islands is sited, reminded all concerned that we had never left Brandenburg.