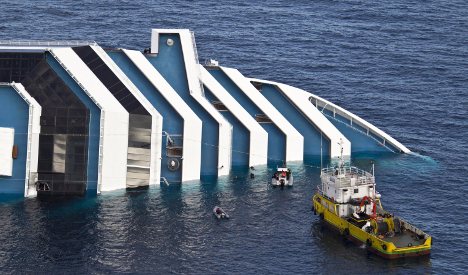 Salvage experts used explosives to blow holes into the hull of the giant cruiser giving divers easier access to the inside of the ship in their hunt for possible survivors and the search for bodies of those who did not manage to escape.

Five bodies were found on Tuesday in the flooded stern section of the ship, which was carrying at least 4,200 people when it ran aground and then turned on its side just off the Italian island of Giglio on Friday night.

The four men and one woman, all aged between 50 and 60, were wearing life jackets when they died, the Italian coastguard said.

Italian radio station RAI said that the man whose body was found on Monday afternoon was a German, although this was not confirmed by Italian or German authorities.

A total of 29 people remained unaccounted for on Tuesday evening, 12 of whom are thought to be from Germany – five from Hesse and two from each of Berlin, Baden-Württemberg and North Rhine-Westphalia as well as one woman from Bavaria.

Others who are missing include six Italians, four French people, two Americans and one Hungarian, an Indian and one person from Peru.

Foreign Minister Guido Westerwelle said on Tuesday his staff were urgently trying to trace the missing Germans, and called for those responsible for the accident to face consequences.

It appears the captain of the ship, Francesco Schettino, decided personally on the dangerous route close to the shore in order to allow the head waiter to wave to relatives living on the island. This was not the first time such a manoeuvre had been attempted, Italian media reported.

He is said to have left the ship during the early stages of the evacuation, and to have refused to return to take charge of getting people off it. The Italian paper Corriere della Sera reported on Tuesday that the crew practically mutinied and carried out the evacuation themselves after he failed to issue orders once the ship had hit rocks.

Schettino could be jailed for 15 years if he is charged and convicted of manslaughter.

Efforts are turning from rescue of people to prevention of an environmental disaster, with the focus on the nearly 2,400 tonnes of fuel in the ship’s tanks.

“The accident site is in the middle of the Pelagos ocean protection area. That is the most important whale protection area of the Mediterranean, home to eight cetacean species from dolphins to sperm whales and finback whales,” warned environmental group WWF on Tuesday.