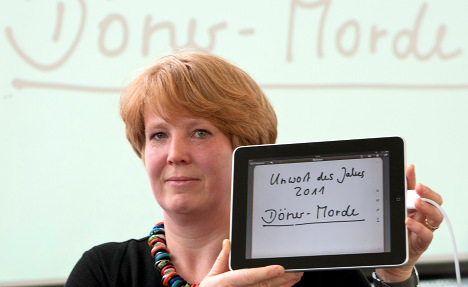 “This term supported the assumption that the motive behind the murders lay in a criminal milieu surrounding protection money or drug selling,” wrote Nina Janich, the spokeswoman for the Unwort des Jahres (Non-Word of the Year) judging panel in a written statement.

“With the factually inaccurate, folkloric-stereotypical labelling of a series of right-wing terrorist murders, entire populations are marginalized and the victims themselves discriminated against to the highest degree.”

Janich was referring to the widespread use of Döner-Morde by German media for the series of murders of shop keepers, eight of Turkish origin and one Greek, who were killed by a group of neo-Nazis.

Among the runner-ups, the panel complained that marktkonforme Demokratie (market-compliant democracy) a term first used in a speech by Chancellor Angela Merkel, inappropriately conflated democracy and economics when both should stand alone.

The panel also worked with the Düsseldorf Stock Exchange to find the worst word of 2011 related to the stock market, which it decided was Euro-Gipfel or “Euro Summit,” used to describe the seemingly endless series of top-level political meetings on the eurozone’s financial problems.

More than 2,000 Germans nominated 923 different words for consideration by as the Non-Word of the Year, which has been selected annually by a panel of four academics, one journalist and on other, since 1991.