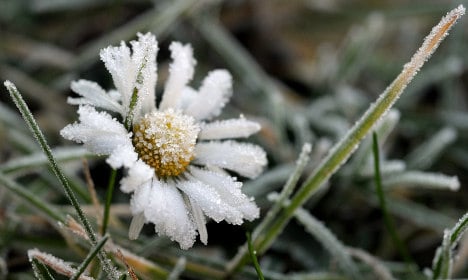 The German Weather Service (DWD) said on Tuesday that the country would be divided, with a thick blanket of cloud and scattered rainfall covering the east, whilst in the west it should remain dry with sunny spells. In higher areas, such as the Alps, a heavy frost should be expected.

“Nighttime temperatures in particular will be dropping” a spokesman from the DWD told The Local.

“We don’t know exactly how long this will last, but it shouldn’t be prolonged.”

By Wednesday the whole of Germany will be affected by a new chunk of low pressure working its way across the country bringing cold Arctic air, which will cause temperatures to drop as low as minus 15 Celsius in the foothills of the Alps.

With the exception of the north and east of the country, there will be a lingering frost all morning. In the mountains, however, prepare for this to last for most of the day.

Temperatures on Wednesday will barely break out of the minuses, and higher areas should not expect to be reach far above minus 10 degrees Celsius.

In areas of Saxony and in the Bavarian forest, weather conditions are predicted to become treacherous, and the DWD has issued a warning of black ice covered by fresh snow.

By Thursday temperatures will have sunk over most of the country, with an increased chance of snow in the north during the daytime.

But the DWD said the cold snap should not last for very long, and most plants which have started spring early should escape serious damage.

“Because this sub-zero temperature shouldn’t last too long, all the flowers that have bloomed early this year will hopefully survive the winter,” said the spokesman.