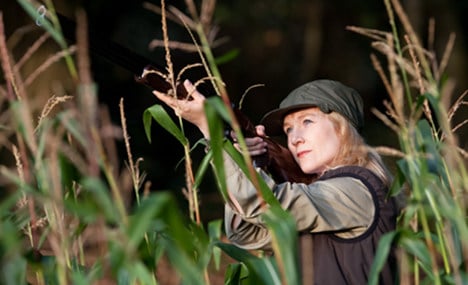 Johanna Hofmann, 31, watches and listens with her rifle at hand in the forest near Nauen, about 40 kilometres west of Berlin.

Every animal, be it a wild boar, fox, deer, rabbit or bird, makes a different noise in the forest, she said. When she spots a potential target, she picks up her rifle, takes aim and holds her breath.

“I try to keep completely quiet, composed inside and concentrated, and breathe quietly because of course I’m quite excited. And I have to be sure it’s safe and it’ll be a good shot,” she said.

Hoffman loves nature and the thrill of the hunt. And she’s one of a new breed of women hunters in Germany who are sweeping away stereotypes about the long male-dominated sport.

He said women currently made up just under a quarter of all those who sit the exam to obtain a permit to hunt in Germany.

Women often take up hunting because they want to eat fresh game, which they consider to be healthier and of better quality than store-bought meat or to spend time outside the city getting close to nature, he said.

Nature conservation is another factor cited by women. By law, land used for agriculture, fishing or forestry in Germany has to be hunted to prevent disease due to overpopulation or damage from over-feeding.

With the knife she carries in her shoulder bag, Hofmann removes the innards of whatever she hunts, takes it to be weighed and registered at the forestry office, pays for the meat and then takes it home.

She cooks and eats what she kills and shuns supermarket meat – Christmas dinner this year was a deer she had hunted and prepared herself which she said gave “real value” to the meal.

“Many people eat meat that comes from the supermarket and they don’t question where that meat comes from, but (say) a hunter is a murderer. That’s a paradox,” she said.

Having studied forestry, she works as an adviser at the Hunting Association and, unless it is raining heavily, hunts once a week with her boyfriend, whom she met at a game biologists’ conference.

Mother-of-three Nathalie Bunke, 46, passed the hunting exam 10 years ago after devoting two evenings a week, plus weekends, for six months to studying. At the time, her two eldest children were aged two and four.

“It was hard but it was so interesting, also the biology aspect,” she said. “And it was for me, I wanted to do it and it was so fascinating. I failed (the exam) the first time and did it again.”

Having later got her husband into hunting too, the Berlin couple go into the forest together and have even taken all three of their daughters – the youngest now six – on hunts with them, she said.

Her eyes lit as she described the thrill and surprise of seeing an owl silently fly by, of watching a sunrise, taking in the noises, smells and peace, or enjoying a moment that no one else will ever experience.

“Even when you’re sitting in the raised hide and there’s no animal, which also happens, you can be sure a beetle or a spider will run by, and usually I have a camera with me,” Bunke said.

With the bone of a roebuck she once shot hanging around her neck, she said she now uses animal parts and fur to make and sell jewellery and educational materials, as well as volunteering to train other hunters and teaching.

Those in the know see differences in the way men and women approach hunting.

Men are more interested in trophies and tend to be knowledgeable about the guns, Hofmann said.

“The women I know who hunt are more prudent, are more cautious, they’re not so quick to shoot,” Bunke said.

While women were never formally restricted from hunting, around 40 years ago they might have disparagingly been referred to as a “Flintenweib” (roughly translated, gunwoman), Reinwald said.

Now, women-only hunting events take place in the North Rhine-Westphalia state, he said, adding that many women he knew were better shots than their male counterparts.

“I think some women, if they decide to become a hunter, feel that they have to be even better than their male colleagues, and they sometimes are,” he added.

Hofmann acknowledged that hunting was still a male-dominated field but said her interest had been welcomed and accepted.

She recounted that as the only woman in a group of six on a course to train her dog for hunting, she had heard that behind her back she was referred to as “the little girl”.

“But in the end, I passed and the five men failed,” she said, laughing.