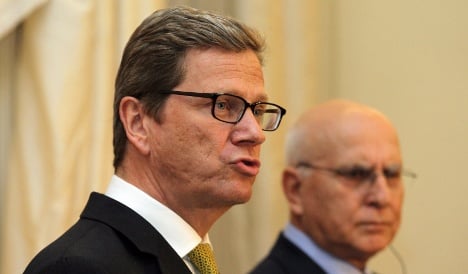 “With my visit in Greece I want to give a message to the Greek people that we want to solve the problems together,” Guido Westerwelle told reporters after talks with Greek Foreign Minister Stavros Dimas.

“Greece and Europe belong together,” he added.

“The commitment from Germany that they will stand next to Greece and work together until my country emerges from this crisis, is very significant,” Dimas responded.

Greece would emerge stronger and more united from the crisis, he added.

Earlier Sunday Westerwelle met Prime Minister Lucas Papademos and separately with Antonis Samaras, the head of the New Democracy party, a member of the governing coalition and the current frontrunner in opinion polls.

His visit also came two days after talks between Greece and private bank creditors on a critical debt write-down, stalled.

That raised the prospect of a disorderly default that would plunge the eurozone even deeper into crisis.

The proposed deal would have seen banks taking a voluntary 50 percent “haircut” on their Greek debt, which would cut about €100 billion ($127 billion) from Athens’ massive debt burden that currently exceeds €350 billion.

On Tuesday, officials from the so-called “troika” of international auditors, are due back in Athens to assess Greece’s efforts in reducing its deficit and launching structural reforms.

A positive report from them is as vital as a deal on the debt write-down if Greece is to get another €130 billion in loans.

It has already used up two-thirds of the first €110-billion rescue package it secured from the EU and IMF in May 2010.

The European Task Force, set up to help Greece implement structural reforms, is also due back in Athens this week.

“The most effective way of making up lost ground is by containing salaries and increasing productivity,” Horst Reichenbach, the head of the task force, said in Sunday’s edition of the Typos Tis Kyriakis newspaper.

Greece could bridge the competitiveness gap between its economy and others in Europe by the end of 2013, he said.

German Chancellor Angela Merkel was also optimistic in a radio interview Sunday. Greece could rebuild its economy by itself with structural reforms despite the austerity drive it has had to undergo, she said.

The aim of restructuring some of Greece’s debt was to bring it down to 120 percent of its gross domestic product by 2020 so it could then return to the market, she added.