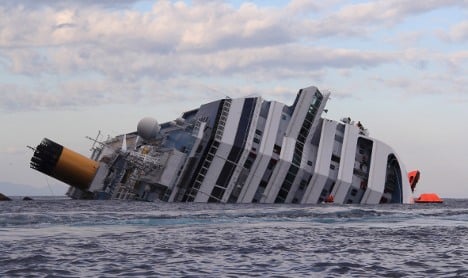 Around ten Germans were hurt when the “Costa Concordia” – which had around 4,200 people on board – hit a reef just off the small island of Giglio off the Tuscany coast, and turned on its side.

After a sixth body was recovered on Monday morning the number of missing was 14, with the Italian news service Ansa reporting the latest victim was a passenger.

Of the thousands of passengers from more than 60 countries, 566 were Germans. Most have already been brought home on planes or buses, spokesman for Costa Cruises, Werner Claasen said on Sunday.

But the German foreign ministry said on Monday that the number of German nationals missing was a “low double digit”. Regional police forces are gathering missing persons reports – although they say some of those who have not yet contacted relatives could be on the way home.

Five people are known to be missing from Hesse, as well as two from each of Berlin, Baden-Württemberg and North Rhine-Westphalia and one from Bavaria.

“We don’t know where they are,” said a Foreign Ministry spokesman on Monday. He said there could certainly be more bad news from the wreck, where divers have been searching the flooded decks for survivors – and bodies. Their search was halted on Monday due to stormy conditions.

Police in Baden-Württemberg said on Monday that a 66-year-old woman from Laupheim, and a 71-year-old woman from the Nürtingen area were among the missing. And police in Offenbach, Hesse, said that a couple aged 71 and 72 from Mühlheim am Main, who were on the ship, had been reported as missing.

The captain of the ship Francesco Schettino, who has been arrested by Italian police, has come under severe criticism for sailing so close to the coast – and according to some reports, leaving the ship and refusing to return to coordinate the evacuation.

Hundreds of passengers, crew members and rescuers have already been questioned about what happened and when.

Stefan Jaeger, president of the European Cruiser Association told Monday’s Financial Times Deutschland it was negligent to navigate to close to Giglio. He also suggested that the crew and emergency teams were unable to cope with the emergency.

Even the owners of the ship conceded that the captain could have been at fault. A Costa Crociere statement said, “It appears that the commander made errors of judgement which had the most serious consequences.”