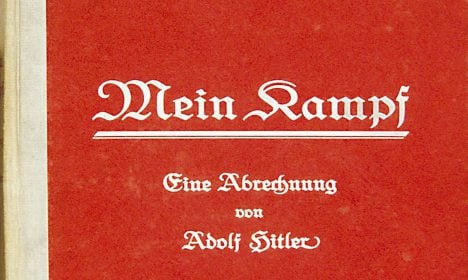 “It is about time that the broader public is given the opportunity to deal with the original text,” he told Der Spiegel newsweekly.

McGee says he will publish critical commentaries alongside the excerpts from Mein Kampf, which will go on sale in Germany the week after next. He plans to print three 15-page editions, with a print run of 100,000 each.

The British publisher caused controversy back in 2009 when he published Zeitungszeugen (“Newspaper Witness”), which included annotated facsimiles of Nazi newspapers like Der Angriff and the Völkische Beobachter.

The authorities in the state of Bavaria, which owns the copyright to Nazi publications, including Mein Kampf, confiscated more than 3,000 copies of Zeitungszeugen and pressed charges against McGee for publishing the texts.

However, a Munich court ruled in 2009 that although the publication of Nazi propaganda is illegal, McGee was not breaking the law because his intention was not whip up racial hatred. The judges also ruled that printing Nazi swastikas from the original mastheads, which are generally outlawed in Germany, was legal in an educational context.

McGee is, therefore, unlikely to face any legal hurdles over the publication of the extracts from Hitler’s book, which the future dictator wrote while serving time in prison in Munich for attempting to seize power in the 1923 Beer Hall Putsch.

Dieter Graumann, president of the Central Council of Jews in Germany, greeted McGee’s plans, saying he hoped that it would “go some way to demystifying” the book.