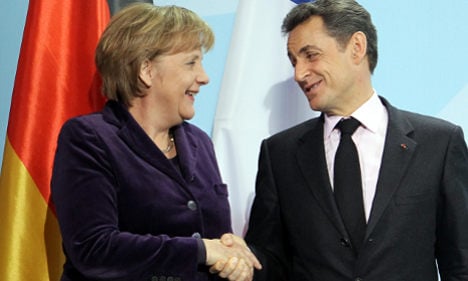 unemployment ahead of presidential and parliamentary elections this year.

Sarkozy is hoping he can emulate the so-called Hartz labour reforms of 2003 to 2005, which are seen as having helped Germany escape the economic crisis

currently gripping most of Europe.

But this is just one of the many pages that France hopes to borrow from Germany’s economic textbook.

Earlier this month Sarkozy’s government vowed to cut payroll charges on employers and workers to try to make French firms more competitive, and to recoup the revenue mainly by raising value added tax.

The countries with this so-called “social tax” most cited by the government are Denmark and Germany, where it was introduced in 2007.

unemployment and remain Europe’s biggest exporter despite the crisis.

Sarkozy also hopes to follow Germany’s lead and introduce a “golden rule” for French government budgets, which would oblige future governments to borrow only to invest and not in order to fund current spending.

Sarkozy occasionally has spats with his German counterpart Angela Merkel. They have had seriously different ideas on how to resolve the European debt crisis, for example, and Sarkozy has most recently irked Merkel by vowing to go it alone in introducing a financial transaction tax.

But the French leader clearly thinks his country has a lot to learn from a neighbour with which it has fought three wars in the past century and a half.

“France, with respect to the management of companies, has fallen into the clutches of the ideological principles of Anglo-Saxon capitalism, which is to

say the primacy of the shareholder,” he said.

France should instead adopt the German industrial model characterised by close cooperation between unions and management, an emphasis on vocational

training, and closer links between financial and industrial sectors, he added.

The German economy does show signs of slowing down – it shrank slightly in the fourth quarter of 2011 – but overall for the year it grew a healthy three percent, making it one of its best years since the country was reunited in 1990.

INSEE, the French national statistics office, says it expects France to fall into a brief recession, with the economy contracting 0.2 percent in the three months to December and another 0.1 percent in the first quarter of 2012.

German unemployment is at its lowest level in 20 years, at 7.1 percent, while in France the number of jobless – at nearly three million – is at a 12-year high, at 9.8 percent.

The French government predicts that its public deficit – the shortfall between tax income and spending – for 2011 will be 97.2 billion euros, or slightly lower than its target of 5.7 percent of gross domestic product (GDP).

Germany managed to bring its public deficit down to just 1.0 percent last year, from 4.3 percent the year before.

Sarkozy’s “social summit” next week is a major plank in his bid to narrow the yawning gaps between the French and German economies.

A major reason Germany has managed to keep unemployment low is the use of Kurzarbeit (“reduced working hours”), a system that allows firms to reduce workers’ hours, with the government making up some of their lost pay.

He pointed to a growing underclass of badly-paid workers who have benefited little from Germany’s strong economy, and noted statistics that show that German real gross wages declined by 4.0 percent between 2000 and 2010.

“Competitiveness is like cholesterol – there is good and bad, as (Nobel-winning economist Paul) Krugman said,” noted Larrouturou, whose latest

“Training workers, inventing new products, getting up in the morning and conquering more market share, that’s all good. But lowering everybody’s

salaries is very dangerous,” he said.

“Being downgraded along with Germany would not be a downgrade, just a shift in scale,” wrote Arnaud Leparmentier, a political journalist at Le Monde newspaper.

“But now Nicolas Sarkozy’s politics, which consist of presenting France as Germany’s alter ego, have collapsed,” he said.