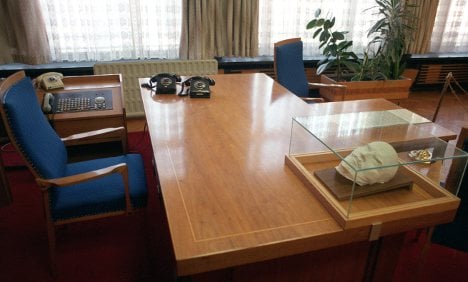 Visitors on Saturday were allowed to see the former office of Erich Mielke, director of the Stasi from 1957 to 1989, which has been restored with its original furnishings, including his large polished wooden desk and his two black telephones. In the foyer, a small beige bus used to transport prisoners was on display.

A series of discussions and films were to take place throughout the day to mark the occasion.

Up to now only a small part of the massive complex in the Berlin district of Lichtenberg was accessible to visitors. The site will house a permanent exhibition on the work of the Stasi, due to open in 2013, as well as space for archives, a library, bookshop and cafe.

Roland Jahn, the head of the authority that administers the Stasi files, said the former secret service headquarters should serve as a kind of campus for democracy. Jahn, who was a civil rights activist in the former East Germany, told the DPA news agency that younger generations must be shown how the communist dictatorship functioned.

A staff of almost 7,000 were based at the complex on Normannstrasse from 1961 until the demise of the regime. On Jan. 15, 1990 East Germans stormed the building and rescued sacks containing millions of documents before they could be destroyed.