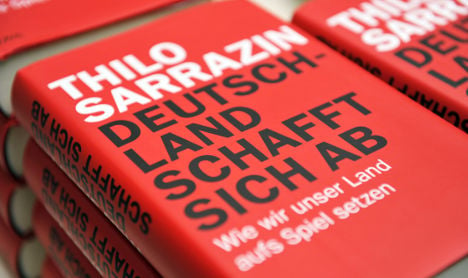 Martin Zet has not described exactly how he’ll recycle copies of the book, which he views as xenophobic. But with the aid of the public, he wants to come up with a new purpose for the recycled tomes at at the Berlin Biennale art exhibition that runs between the end of April and July.

The book, which was published in 2010 and contends that Muslims are largely incompatible with German society, has sold 1.3 million copies and sparked a wide ranging debate about immigration.

Zet’s plans have been slammed as being insensitive in light of German history. Historian Werner Treß, who has researched the Nazi regime’s burning of books, told the DPA news agency that every book, regardless of its content, was a cultural good and should not be publicly destroyed. “That means that I have to protect a book whose content I deeply reject.”

Almost immediately after taking power in 1933, the Nazis began ceremonially burning books that did not correspond to their fascist ideology, including titles by Jewish and Communist authors.

And Professor Julius H. Schoeps, director of the Moses Mendelssohn Center for European Jewish Studies at the University of Potsdam, said on Friday: “This is not an act of art, rather one of embarrassment, which should be prevented.”

Zet has said that he intends to set up various collection points for Sarrazin’s book and will show copies of them in an installation before the recycling.

Berlin’s House of World Cultures, which had been one of the supporters of the art action, has now called for a “conceptual clarification,” saying that the fact that a link had been made with the Nazi book burnings had lead to polarization.

However, the Berlin KW Institute, which is organizing the Biennale, said that the art project was not aimed at the destruction of books, but rather their “transformation” as an act of resistance to their polarizing content.