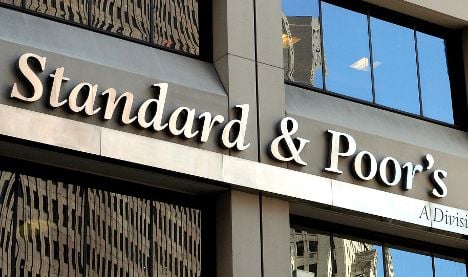 “The decision confirms my conviction that we in Europe still have a long road ahead of us until investor confidence is again restored,” she told reporters in the northern German city of Kiel.

“But it’s also apparent that we have pursued resolutely this road of a stable currency, solid finances and sustainable growth,” she said.

Merkel also stressed that Standard and Poor’s, which Friday decided to cut

but not Germany, was just one of three ratings agencies.

She said they had “taken note” of the decision. “It did not totally

surprise us after discussions of recent weeks,” she said.

Earlier on Saturday Finance Minister Wolfgang Schäuble sought to play down the ratings downgrade of France and Austria, insisting eurozone nations were on the “right track” and warning against overestimating its impact.

The eurozone economy was plunged back into crisis on Friday as France and Austria were stripped of their triple-A credit ratings and talks to agree a Greek debt writedown stalled.

But, Schäuble told television station RTL: “In recent months, we have increasingly come to an understanding worldwide that we should not overestimate the ratings agencies in their assessments.”

“That there is great uncertainty in the euro countries is not new and of course affects us all,” said the minister, speaking on the sidelines of a local election event in northern Germany.

Later, in the northern German city of Kiel, he said France was “on the right track” despite the downgrade, adding that members of the 17-country eurozone were very closely connected.

“Therefore we are not indifferent to this but together we are on the right track.

and this we have to do all together,” he added.

His ministry said later in a statement that it would work with its eurozone partners to restore the faith of the markets after the downgrades.

By “anchoring concrete fiscal rules in a binding agreement, we will stabilize the public finances of the eurozone’s members, helping to restore and maintain market confidence in a sustainable manner,” it said.

The ministry said the eurozone was equipped to take the steps necessary to slash public debt and win back investors.

“Our determination to strengthen Germany’s public finances and to work towards the resolution of the sovereign debt crisis in the eurozone is beyond doubt,” it said. “The same holds for our partners in the region.”

It said that efforts in the last few weeks toward a pact for greater fiscal integration and budget surveillance, which member states hope to have signedby March, had already begun to bear fruit.

“Recent developments have shown that the markets are honouring these

It had warned last month that the credit ratings of 15 of the eurozone’s 17 member states were at risk of a downgrade due to the ongoing debt crisis.

France was at that time warned it could be hit with a two-notch downgrade.