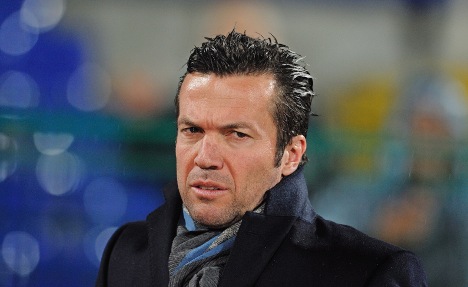 The district court in Wuppertal announced on Friday it was posting a statement of claim against him – after private detectives followed his trail through Germany and even Israel, where he is said to have registered himself as living.

One detective even tried to hand him the letter at his old club Bayern Munich’s stadium while he was watching a match, only to be thrown out, the court said.

But their efforts were not in vain, and they were able to convince the district court in Wuppertal to go public with their statement of claim.

“This means that a month after it is publicly posted at the court and we have publicised it, the claim is legally considered to have been delivered to him and the case can proceed,” court spokesman Stephan Katerloh told The Local.

Although the court has gone public with details of the hunt for Matthäus, it has not issued details of the claim against him. A hearing is expected to be held in May.

Bild newspaper’s journalists were obviously capable of reaching Matthäus – their website posted a statement from him just a few hours after the court had issued its statement.

“I cannot imagine what it is, I don’t know what it is about,” he told the paper.

His advisor and spokesman Wim Vogel told the paper, “It is rubbish to say that Matthäus is nowhere to be found. His main residence is in Budapest, Hungary. He is not a man who hides away.” He said he had applied to see documents relating to the case.

Matthäus had a long career on the pitch at Bayern Munich, Inter Milan and of course, the West German and captaining the united German team to victory at the 1990 World Cup.

His career as a coach has been less glittering, and he was most recently sacked as coach of the Bulgarian team in September after they failed to qualify for the 2012 European Championship.

His busy personal life has often featured on the gossip pages of German magazines, as he progressed through four marriages.