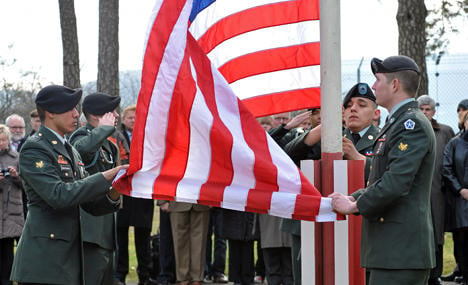 American Defence Secretary Leon E. Panetta said two of the four combat brigades currently in Europe would be moved. That is between 10,000 to 15,000 soldiers in total.

As three of those four brigades are in Germany, several thousand US soldiers stationed here are bound to be packing their bags soon. The third brigade is in Italy. Panetta said other units would be moved and out of Europe on a rotational basis.

Panetta played down the effect of the withdrawal on European communities by saying that many combat troops had been sent to Afghanistan and Iraq in recent years anyway.

In a written statement, Lt. Gen. Mark P. Hertling, who is the Army’s commanding general in Europe said he could not release details.

“Until those plans mature and are formally approved, we can provide no further information regarding specific units or communities involved, or the methods of rotating units,” he said.

But the US military’s Stars and Stripes newspaper said that previous discussion about troop withdrawal from Germany had focused on Army troops stationed in Grafenwöhr, Bavaria and Baumholder, Rhineland-Palatinate.

Approximately 41,000 US Army personnel are currently based in Europe, with the majority in Germany. There are about 80,000 US military personnel, including the Navy, Air Force and Marine Corps members in Europe

US authorities have been steadily reducing their European forces since the end of the Cold War, when more than 200,000 US military personnel were stationed on the continent.

The British government has also announced a withdrawal of its own, with half of the country’s 20,000 Germany-based troops returning home by 2015 and the rest leaving by 2020.