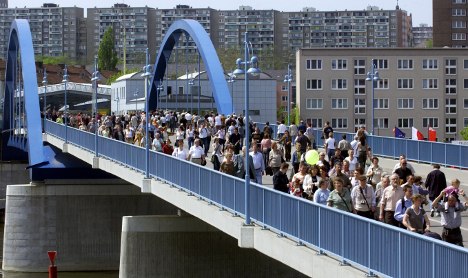 Last year 81.80 million people were living in Germany, the most populous country in the European Union, Destatis said, an increase of more than 50,000 people over the previous year.

With one of the lowest birth rates in Europe, Germany’s population has been on a steady decline for most of the past decade – new people are desperately needed to prevent a demographic crisis.

Last year’s rise was due solely to immigration, with deaths still far outweighing births in the rapidly ageing domestic society.

“The majority of people in this positive immigration trend came from countries which joined the European Union in 2004, especially Poland,” a statement said.

After the labour market of Europe’s top economy was fully opened up to other EU members in 2011, an average of 28,000 people has moved to Germany each month.

Unemployment is at record lows in Germany. Like other advanced economies, Germany is facing a snowballing population problem, leaving the country short of workers and adding to the strain on already stretched public coffers.

Chancellor Angela Merkel has introduced a raft of measures aimed at boosting the birth rate, including generous parental leave allowances and an increase in kindergarten places.

There have also been some tentative moves to attract well-qualified foreigners to Germany – particular those working in engineering, where there is a well-publicised lack of specialists.

But those efforts have not yet had a huge effect, with many of those targeted preferring to go to English-speaking countries.