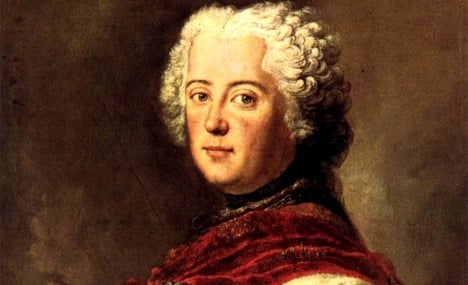 Germans will be doing it however, in a much more understated way than Frederick might have – by reading new books about him, visiting his grand palaces and hearing music that honours his legacy.

It is in Potsdam, Frederick’s favourite city, that the king lives on in massive gardens he frolicked through and the palaces he loved to call home.

The New Palace, completed by Frederick in 1769, is among the most majestic of his Potsdam palaces and will be home to an exhibition running from April to October that is expected to draw 350,000 visitors from around the world.

In preparation for the influx of visitors, a special covering is being laid over the palace’s priceless wooden and marble floors to allow people to walk through to see opulent works of art and dozens of rooms which are being restored to look exactly as they did when Frederick lived there.

But there are less tiring ways to learn about the king than walking through the 200-room palace.

Beginning on Frederick’s birthday, visitors to Potsdam’s film museum can check out an exhibition chronicling how the Prussian King has been portrayed on screen over the decades.

And the Potsdam Sanssouci Music Festival in June will feature a selection of music inspired by Frederick. There will even be a baroque re-enactment of Potsdam’s royal festivals in July.

A series of new books also promises new insights into the man who transformed Prussia into a force to be reckoned with.

One of the most interesting promises to be Tom Goeller’s “The Old Fritz: Man, Monarch, Myth,” which delves into Frederick’s personal life, tackling with his rumoured homosexuality and difficult relationship with his father.

Goeller, describing the political hot-topics of Frederick’s day – immigration, war and the state’s use of torture – writes that the King of Prussia is as relevant today as ever.

Among Frederick’s greatest accomplishments before his death in 1786 at the age of 74, were uniting his territory through brilliantly planned and executed military campaigns and modernising the civil service.