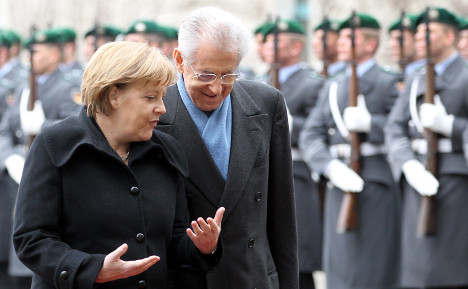 “As for the speed and substance of these measures, I think they will strengthen Italy, will improve its economic prospects and we have watched with great respect how quickly they have been implemented,” Merkel said after meeting Italian Prime Minister Mario Monti.

“I think that overall, the work of the Italian government will be rewarded and I have said from the beginning that we should work very, very closely together,” the chancellor added.

Earlier on Wednesday, Monti had warned in a newspaper interview of possible “anti-European” protests in his country if Rome’s reform efforts were not recognised.

Speaking in German daily Die Welt, Monti complained: “The problem is that despite our sacrifices, we have not got anything in return from the European Union, such as a drop in interest rates.

“Unfortunately, we have to say that our reform policies have not received the recognition and appreciation in Europe that they deserve,” the prime minister added.

“If the Italian people do not soon see tangible success for their savings and reform efforts, there will be a protest against Europe, against Germany – seen as the driver of EU intolerance – and against the ECB (European Central Bank).”

Strengthening Merkel’s hand in her effort to promote fiscal responsibility, data showed Wednesday that the German economy, Europe’s biggest, remained the powerhouse and one of the few bright spots in the eurozone.

The strong performance enabled Germany to bring down its public deficit to just 1.0 percent of GDP last year from 4.3 percent a year earlier.

Elsewhere in the 17-nation eurozone, however, prospects were less rosy.

The European Union revised downwards its figure for eurozone growth over the third quarter of last year, to 0.1 percent.

The previous figure given was 0.2 percent but detailed EU data showed a drop on France’s previously published growth rate between July and September, from 0.4 percent to 0.3 percent, which caused the revision.

Data also showed Wednesday that eurozone banks stashed a record sum with the ECB, suggesting tensions in the financial system remain despite huge injections of cash.

Banks parked €485.9 billion at the ECB on deposit for 24 hours, beating the record set the previous day.