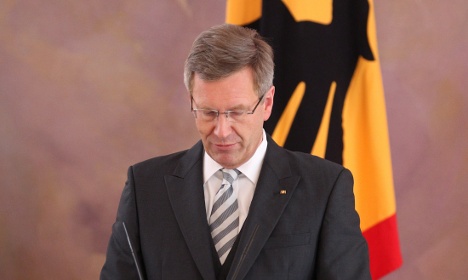 As he prepares to host the annual presidential New Year’s Reception in Berlin, Christian Wulff also faces the embarrassment of respected anti-corruption group Transparency International announcing it will stay away in protest.

“We cannot simply go back to business as usual. The president promised transparency and complete explanation in front of more than 10 million citizens. He has not kept to it,” said TI chairwoman Edda Müller, explaining her decision not to attend the party on Thursday.

And a top member of Wulff’s party, the Christian Democratic Union (CDU), called on him Wednesday to stop communicating with the public through his lawyer and publish a long list of answers to questions about the loan he failed to declare and the angry phone calls he made to newspaper editors about to publish the story.

Speaking to the Hamburger Abendblatt newspaper, Peter Altmaier, manager of the CDU parliamentary party, said it would be “unfortunate” if it appeared that Wulff’s lawyers were not supporting their client.

He then posted a message on Twitter saying, “I wish Christian would put his lawyers on a leash and put the questions/answers on the net.”

He was referring to a list of 400 questions and answers which Wulff promised earlier this month on television he would get his lawyers to publish. The president said at the time, “Tomorrow morning my lawyers will put everything on the internet. Then every citizen can see every detail of the sequence of events, and see them evaluated, legally.”

But it was not posted, and his lawyer Gernot Lehr said on Tuesday that client confidentiality barred him from releasing the six-page summary which was all he had.

Altmeier is the most senior CDU figure so far to publicly criticise Wulff, but another high-ranking CDU member, Parliamentary President Norbert Lammert said on Wednesday the weeks of argument had, “not only taken a lot out of the office holder personally, but sadly also the office itself.” Speaking to the magazine Stern, Lammert denied he had any ambitions to replace Wulff.

Yet on Wednesday Chancellor Angela Merkel repeated her support for Wulff, saying she valued his work.

The president’s lawyers also spoke with Stern on Wednesday to clarify Wulff’s statement on a holiday he took with his new wife in 2008 when he stayed for free in the Italian villa of a friend, Hannover businessman Wolf-Dieter Baumgartl. Wulff had said he stood by the concept of, “cooking with friends, breakfasting, sleeping in their guest rooms.”

A statement in Stern from his lawyers confirmed that Baumgartl was only “partly present” during Wulff’s stay and that staff at the villa had carried out a number of services for the couple.

Author Karl Hugo Pruys said he could not have finished “Christian Wulff – Germany Progresses” without the money, but Groenewold said it had nothing to do with the book.

It has already been revealed that a prominent Lower Saxony businessman Carsten Maschmeyer funded advertising for Wulff’s book “Better the Truth” in 2007 while Wulff was fighting a state election.

As Wulff continues to lose face, a survey published on Wednesday showed that former East German human rights activist Joachim Gauck would be the people’s favourite to replace him. The poll conducted by Forsa for Stern showed 32 percent of those asked would favour Gauck while 11 percent would prefer to see Labour Minister Ursula von der Leyen.