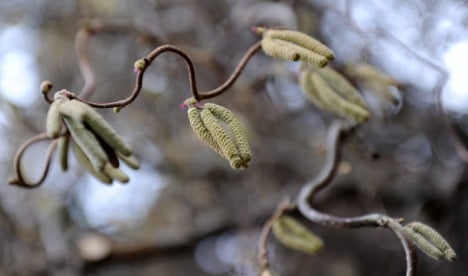 In Lower Saxony, health officials are already dealing with hay fever sufferers following a December with average temperatures of around 4 degrees Celsius. At Göttingen University’s hospital, doctors have been treating several patients presenting with the typical symptoms of runny noses and watery eyes.

The first signs of pollen during this winter were measured in December, a month earlier than usual, according to the German Weather Service (DWD). And that may bode poorly for allergy sufferers.

Those who suffer from a Birch specific hay fever are on track for an uncomfortable summer. “Over the past 12 years the amount of air-borne Birch pollen has followed a pattern, and according to this 2012 will be a bad year,” said a spokesman from the German Foundation for Pollen Information Service.

The warmth is also causing trouble in the Bavarian Alps, where experts said rain and rising temperatures could melt snow and cause severe avalanches – parts of the area had avalanche dangers of between three and four on a five point scale, the region’s avalanche warning service reported.

But while these mild weather conditions will continue into Wednesday, with cloudy skies in the north, sunshine in the south and temperatures between zero and 10 degrees Celsius across the country, the coming days will be wet and chilly.

By Thursday, rain will spread across the north of the country whilst the south will remain bathed in wintery sunshine. Temperatures will range between five and nine degrees.

And on Friday a harsh cold front will begin to move across Germany, with heavy snow forecasted to fall in central hilly areas and around the Alps. In lower states there will be heavy rain, will some falling as hail or sleet. The east will be particularly cold, with temperatures barely reaching over the freezing point during the day.