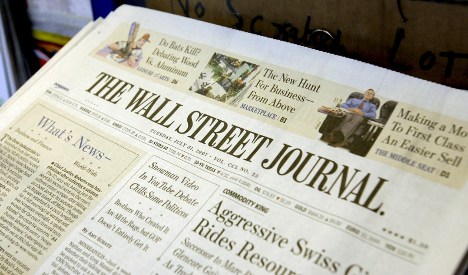 “We asked hundreds of our potential readers what they lack at present in the German business press. The answer came loud and clear: A global perspective not only on what happens in Germany, but also on the latest events in Washington, London, Tokyo and in the emerging markets of Asia or Latin America,” wrote Wall Street Journal Deutschland editor Knut Engelmann.

The new edition, which is only on the internet, follows several other forays by the Rupert Murdoch-owned American newspaper into foreign markets – the Journal has English-language editions targeted toward Asia, Europe and India and runs Chinese, Japanese, Portuguese and Spanish websites.

Its first German edition featured plenty of coverage of the euro crisis, an original interview with a top Siemens executive and a story on Apple CEO Tim Cook taken from the Journal’s English edition.

The Journal has not said how much of the Wall Street Journal Deutschland will be exclusive and how much will be translated stories from the paper’s main edition. But it has a dedicated team based in Frankfurt working alongside reporters and editors from sister company Dow Jones.

It is also not clear whether it will be able to carve out a niche in the competitive German business news market, which is already dominated by the Handelsblatt and Financial Times Deutschland (FDT).

The launch comes after American news website The Huffington Post announced in November that it wanted to create a German edition by the middle of this year.