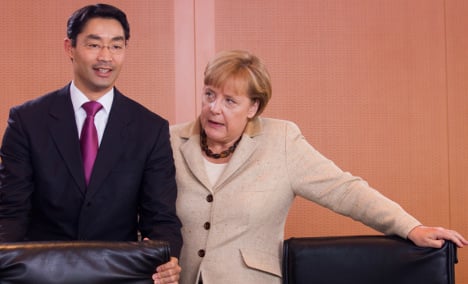 Merkel’s junior coalition partner, the Free Democratic Party (FDP), suggested on Tuesday its coalition agreement with her Christian Democratic Union (CDU) was being put at risk.

The pro-business party fears that financial businesses could move from Frankfurt to London, if a tax on financial transactions was introduced in Germany but not Britain.

“Coalition agreements can only be changed together and not by one side alone,” Hermann Otto Solms, a finance expert at the FDP, told the Handelsblatt on Tuesday.

Otherwise any coalition’s ability to function would be affected at its core, he said. Certain agreements had to be kept, Solms added.

Frank Schäffler, the FDP’s finance expert seemed to threaten Merkel with an mutiny of sorts.

“I clearly warn the chancellor against going further in this direction. She is bound to keep to the relevant agreements, otherwise we as the FDP will no longer have to keep to the arrangements,” he told the Neue Osnabrücker Zeitung newspaper on Tuesday.

“I say it again – such a tax must apply to all EU states, not just for the euro states,” said Philipp Rösler, leader of the FDP and Merkel’s Economy Minister.

Any EU tax would require unanimous support from member states and Britain, given the importance of the City of London to its economy, has said it would block any attempt to introduce it in the bloc. Sweden is also opposed.

Sarkozy, facing an uphill battle for re-election, has said that France should not wait for other European countries to get on board with what has been dubbed a “Robin Hood tax” or “Tobin tax,” after Nobel Prize-winning economist James Tobin, and would forge ahead on its own.

Merkel knew the FDP would be opposed when she said on Monday she was “personally” prepared to implement such a tax without Britain, taking a joint position with Sarkozy and her own Finance Minister, Wolfgang Schäuble.

She won praise from the social justice movement Attac which called it a great step in the right direction.

The FDP would no longer be able to stop the tax being implemented in the eurozone, Attac expert Detlev von Larcher told the Frankfurter Rundschau newspaper.

The tax has long been supported by the opposition Social Democratic Party, which would most likely support any parliamentary vote on the matter – giving Merkel the support she needs, but further undermining the coalition with the FDP.