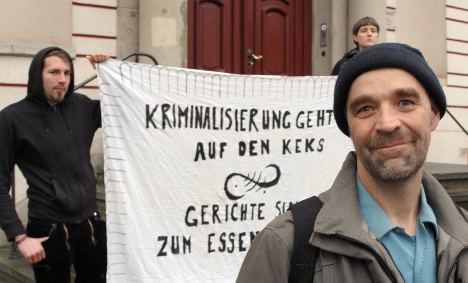 The biscuit-eater and some supporters in front of the Lüneburg court. Photo: DPA

The 52-year-old man from Lower Saxony was initially fined €125 – an estimated five days’ of his money, seeing as he has no job and does not claim social support.

But he challenged the verdict, saying he was being criminalized for surviving, and the case was continued in Lüneburg District Court on Monday.

“I am poor and live from bins,” said the man, who has not been named by German media, according to the Süddeutsche Zeitung on Tuesday.

“I did not claim Hartz IV [social support] because the disrespectful treatment in the social office shocked me.”

Prosecutors offered to drop the case if he would admit trespassing on the fenced-in property of the bakery where he had found the biscuits. He refused, and so the case will continue.