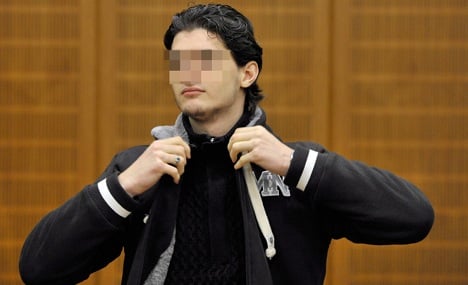 Arid Uka, 21, who was born in Kosovo but grew up in Frankfurt, “wanted to make his personal contribution to the holy war” but not knowing how to get to Afghanistan to fight alongside the Taliban, opted to act closer to home, the federal prosecutor told the court.

He should serve at least the usual maximum sentence in Germany of 15 years, argued prosecutor Jochen Weingarten, saying the case involving two charges of murder and three of attempted murder was a particularly severe one.

Defence lawyer Michaela Roth did not contest Uka’s guilt but argued extenuating circumstances, describing the difficult background of the “shy, quiet and well meaning” young man who had never previously been aggressive and was “without future prospects.”

The March 2 attack took place at Frankfurt airport, where Uka allegedly opened fire on a group of US soldiers on their way to fight in Afghanistan. Airmen Nicholas Jerome Alden, 25, and Zachary Ryan Cuddeback, 21, were killed. Two more soldiers were wounded.

Uka remained silent with his eyes lowered or closed at Monday’s hearing.

At the opening of the trial in August, Uka confessed to the killings and said he wanted to apologise to his victims and their families for what he has called “total idiocy” that contradicted his religious beliefs.

He said he was influenced by “lies” and “propaganda” after seeing a video on the Internet purporting to show US soldiers in Afghanistan raping a local woman.

Roth has argued that the video may have brought back a childhood trauma to Uka, who she said was molested at the age of six.

Prosecutors believe Uka acted alone and did not belong to a terrorist network.

They say he picked out a group of American soldiers who had just flown in from Britain and who were about to travel by bus to the US airbase at Ramstein where troops often take military transport to Iraq or Afghanistan.

Uka is said to have cadged a cigarette from one of the soldiers and asked if they were on their way to Afghanistan.

Prosecutors say when the American said yes, Uka loaded his pistol and followed the men towards the waiting army bus.

He fired into the back of the head of one soldier at point-blank range, killing him. Then, shouting “Allahu Akbar”, he rushed on to the bus and shot dead the 21-year-old driver before opening fire on two more soldiers, aged 21 and 25, who were both seriously injured, prosecutors say.

He is believed to have taken aim at another man cowering behind a seat, but his pistol misfired and he ran off into the airport terminal, pursued by a soldier. Police arrested him shortly afterwards.

The killings have been regarded as the first motivated by Islamic extremism on German soil. A verdict is expected on January 19.